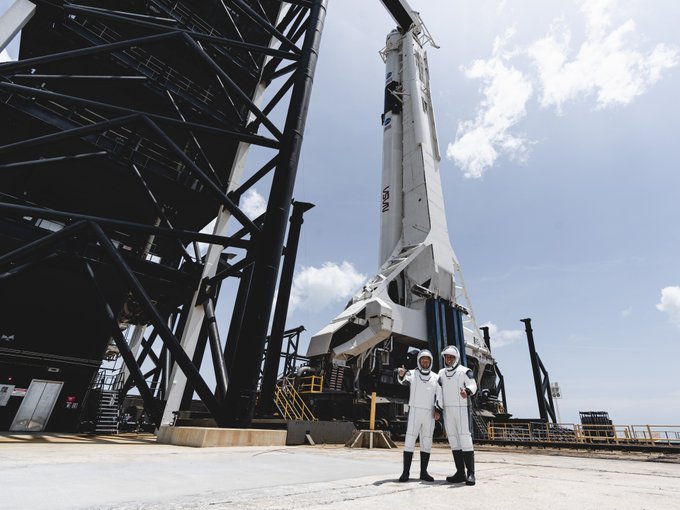 The SpaceX rocket ready for lift off. (Source - Twitter @SpaceX)

Kanika Gakhar, 24, made an important contribution to the SpaceX rocket ship Falcon 9 project that lifted off from the Kennedy Space Centre, US, last week

Octogenarian Rajkumari was visibly overjoyed and proud when SpaceX rocket ship Falcon 9 lifted off the Kennedy Space Centre in the US last week as her young granddaughter too had made a contribution to the project.

Sitting at her modest home, the 86-year-old Rajkumari pointed out that her granddaughter Kanika Gakhar, 24, was a member of the team that designed the landing legs of the rocket in 2018. "As a grandmother, I am the happiest person and the sense of pride is overwhelming. I want to meet my granddaughter at the earliest now. She has made the whole family proud," she told IANS on phone.

Kanika, a student of aerospace engineering and pursuing her master's at MIT in Boston, had worked on a major component of the landing legs -- the main actuator. She was a part of the ground support team and it was their job to ensure that the rocket lands safely. She worked on various projects in three months, including designing the landing legs of rockets that SpaceX sends into space. Falcon 9 legs have the same design.

Kanika is now all set to join SpaceX full time in August. Elon Musk's SpaceX became the first private company to send human beings into orbit, after its Falcon 9 rocket and Crew Dragon spacecraft with two NASA astronauts blasted off from the Kennedy Space Center in Florida on Saturday.

In a video statement from Houston, Texas, Kanika said: "The team of eight people had two interns. I experienced the thrill of working with some of the brightest minds. SpaceX is like a younger version of NASA. We were on its campus in Hawthorne, California. The best part about SpaceX is that even as an intern, I was given full responsibility. Probably because we were selected after rounds of rigorous technical interviews. The internship is a much sought-after one and I got it after applying thrice."

Kanika, during her stint, met SpaceX founder Elon Musk and even interacted with NASA astronauts Doug Hurley and Bob Behnken, who went into space on Saturday. "The level of motivation at SpaceX is unmatched. I saw many launches. I had to design tools to be used by a rocket and we were told of the date of launch. We had to meet the deadlines because the rocket was to use our design. There was pressure but it came with thrill," said Kanika.

Kanika said that though she is more interested in developing the technology to explore space, she would like to visit the unknown sphere herself someday. She thanked her parents and her sister for keeping her motivated and helping her realise her dreams.

Her father Sandeep Kumar said that since the age of five, Kanika had begun saying that she wanted to go to NASA. "Her focus was clear. She was hardworking and pushed herself to reach her goals," he said.

Her mother Simi said that Kanika loved physics subject and would design science projects with household items. While Kanika and her sister -- a doctor in Philadelphia -- were studying in the US, her parents moved to Houston in 2016 from Bengaluru, where Kanika studied till Class 10. Thereafter, she moved to an IB school in Singapore and from there for graduation to Texas A&M University. After completing her master's at MIT, Kanika is set to work full-time at SpaceX as a propulsion engineer.

Her grandmother said that though she was not conversant with space science - she never had any formal schooling - Kanika would keep sending her videos about how and where she worked. "I am now eagerly looking forward to Kanika's visit to Lucknow and all of us having a big family get-together to honour our little girl," she said in an emotional tone.