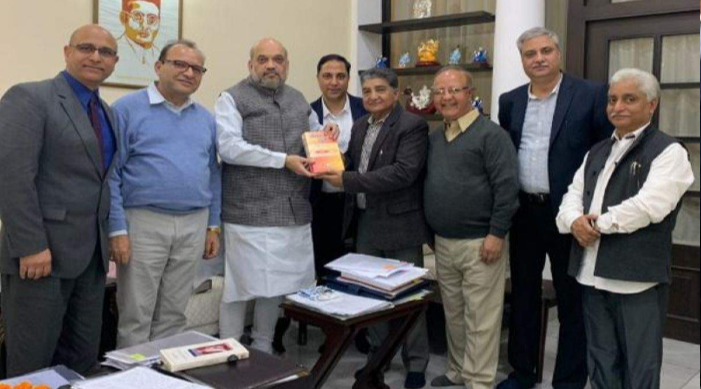 Union Home Minister Amit Shah assured a delegation of prominent Kashmiri Pandits that the government will establish separate townships for them in 10 districts of Kashmir.

Ten special townships and renovation and rebuilding of temples destroyed and desecrated by terrorists were among the promises made by Union Home Minister Amit Shah to a delegation of Kashmiri Pandits on Tuesday.
TAccording to the report, the Minister gave the assurance to a seven-member Kashmiri Pandit delegation that met him for an hour at his residence.

“The Minister promised to resettle all Kashmiri Pandits in their respective districts. He also assured that the resettlement process will be done in phases amid tight security,”news agency IANS quoted Utpal Kaul as having said.

Kaul said that the Home Minister also assured the delegation that the age limit for government jobs vis-a-vis Kashmiri Pandits will be increased up to 50 years and the government will help reclaim and reparation of their encroached properties in the Valley.

“All temples in the Valley will also be renovated,” Kaul said quoting Shah.

The delegation handed over a memorandum to him to thank the Union government for the abrogation of Articles 370 and 35A of the Constitution relating to the erstwhile state of Jammu and Kashmir.

“The delegation members expressed heartfelt thanks to the Minister for maintaining a consistent position on its promise to rehabilitate the displaced Kashmiri Pandits in the Kashmir valley,” IANS reported.

“The delegation also thanked the minister for abrogating article 370 and 35A whose pernicious impact has destroyed the Kashmiri society, culture, civilization, economic progress and the ability to lead a peaceful life in the valley,” newsagency IANS quoted the memorandum as saying.

The delegation demanded the formation of an advisory council of Kashmiri Pandits to work under the aegis of the Ministry of Home Affairs to come up with a plan for full restorative justice for the Kashmiri Pandits.

“The advisory council will have representation from mainstream community bodies, youth, women, eminent community think tank members, Jagati, rural and urban residents from the community and even overseas representation,” the memorandum added.

The delegation requested Shah to accept the community’s demand for a single concentrated rehabilitation plan, including employment and other rights, enshrined in the Constitution as well as restoration and rebuilding of temples, shrines and community assets, including crematoriums.

The Kashmiri Pandits also demanded setting up of a commission to investigate the cause of the genocide and ethnic cleansing faced by them in the Valley, with proactive steps to initiate legal proceedings and secure conviction of those responsible, said the report.

“The Minister gave a patient hearing to our demands and conveyed that rehabilitation of our community is an utmost priority with the government. He sought help from our community to compile a database of all the properties that have been either occupied or encroached upon so that the government can initiate redressal mechanisms to restore the property to the rightful owner,” newsagency IANS quoted the delegation as having said.

He assured the delegation that the temples, shrines and all other community assets will be restored and made operational at the earliest, it said.

Shah informed the delegation that a massive drive is underway to generate employment and ensure heavy investment in various sectors of the new union territory”s economy, the agency reported .