A new Tirumala temple in Jammu, big boost for tourism 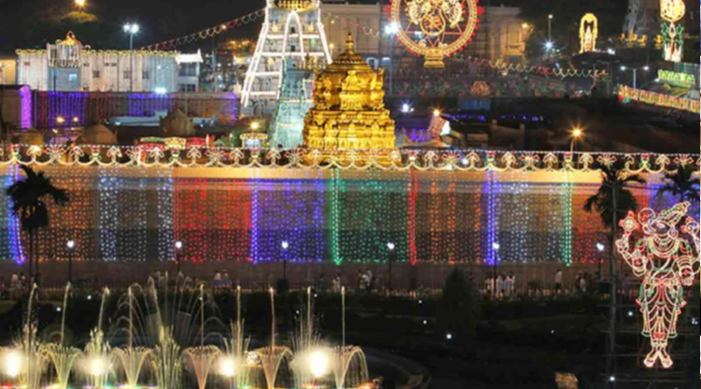 The Jammu administration has given in-principle approval to allot 100 acres of land to the Tirumala Tirupati Devasthanams trust to build a replica of the Tirumala temple currently in Andhra Pradesh, according to reports. Reports further stated that the temple premise will also have a Vedic school and a hospital. It is likely to be built in a span of two years. Take a look at why the development can be a real tourism boost for people in Jammu!

For most people visiting the erstwhile state of Jammu and Kashmir, their focus remained confined to the scenic beauty in Kashmir valley and Ladakh. This can also be seen from the fact that in the official tourism website of the erstwhile government, not only were Kashmir destinations much higher in number but the website’s lesser-known tab, having 8 destinations, also included only Kashmir-based destinations.

The over-shadowed Jammu, which was known as the land of temples, did not get much exposure or a boost even as a preferred destination for even the pilgrims, let alone other tourists. Added to that the political turmoil surrounding the state, Jammu’s tourism was never really able to reach its full potential, with most pilgrims going to Jammu only for a visit to the Vaishno Devi Temple.

Over and above that, the abrogation of Article 370 and the formation of Jammu and Kashmir as a Union Territory separate from Ladakh, further dented Jammu’s tourism for the last six months. However, now, the Centre is bent towards restoring tourism in Ladakh and Kashmir and also giving a much-needed nudge to the industry in Jammu.

Tourism
The Tirumala temple in Andhra Pradesh is one of the most visited temples in India. Built by the Tirumala Tirupati Devasthanams, the temple is dedicated to Lord Venkateswara, an incarnation of Lord Vishnu, and is hence a significant Vaishnavite temple. It is the richest temple in the world, based on the donations received and its wealth, and is visited by as many as 3 to 4 crore people every year.

With an exact replica to be made in Jammu, the Tirumala Balaji temple in the northern Union Territory will attract several tourists, especially from north India. Combining this with the pilgrim influx for Vaishno Devi temple, and the hotels and the tourism industry will get a major boost.

Moreover, with this, Jammu will also be able to contribute significantly towards the tourism industry of the J&K UT, something it has not been able to do so far.

Apart from that, the temple will also attract locals to open shops and shopping complexes in the vicinity – another area which can be exploited for job prospects. Not only that, the boost in the tourism industry will attract multinational corporations to set up their franchises, which will again require man force.

For the college-going students also, the temple will bring the opportunity to take up part-time jobs that can be tourism-oriented.
After the abrogation of Article 370, the J&K UT needs several measures to boost the economy of the state. With the multiple prospective benefits of the establishment of Tirumala Balaji temple in Jammu, it seems that the government might just be able to revive the UT and give it a push in the right direction.