LG calls for financial empowerment of people to boost economy 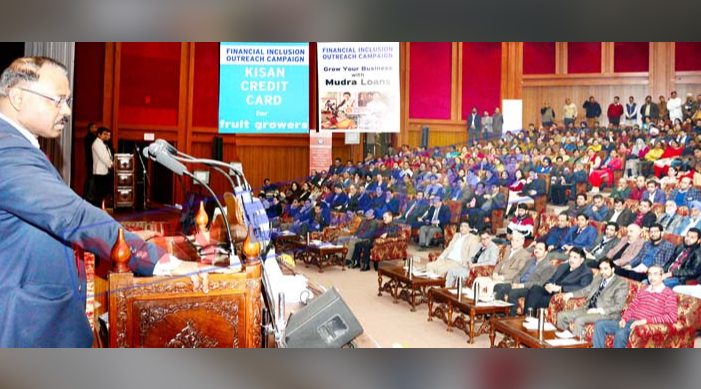 Lieutenant Governor Girish Chandra Murmu on Tuesday called for financially empowering the people along with politically and socially which will give boost to the economy in the Union Territory.

Murmu was speaking at the launching ceremony of ‘Financial Inclusion Outreach Programme’ which had special focus on extending banking services to all unbanked areas. “in a democracy not only politically and socially, but financially also the people have to be empowered,” the Lieutenant Governor said. He added that once the people are empowered financially, they will be uplifted and the economy of the Union Territory will get boost.

Murmu called upon the participants of ‘Financial Inclusion Outreach Programme’ to aware the people about the schemes and programmes of the Government through the outreach.

“They should also take the help of Sarpanchs and Panchs, Self Help Groups and others to brief the people on the Government schemes,” he said.

The Lieutenant Governor observed that promoting financial inclusion means taking actions which result in expanding people’s access to the services offered by the formal financial sector.

“The issue of promoting the inclusion of people’s economic activity into the financial system has profound consequences. It not only caters to the broader economic agenda of allowing a wider range of people, especially those in lower-income groups, access to financial services but also adds to overall economic growth. This is indispensable to the social agenda of reducing income inequality and poverty by providing secure saving & credit facilities and seamless access to social security, subsidies, and insurance schemes provided by the Government,” Murmu said.

He said there are five main factors that go behind the conceptualization of financial inclusion including financial empowerment of every citizen, formalizing the economy, enhancing national productivity, bringing in transparency and optimization of national resources.

“There is a dire need to push this greater social cause by all the stakeholders and there is a great responsibility on our shoulders”, the Lieutenant Governor said.

He called for optimum utilization of resources so that common people could benefit from the financial activities and schemes being extended by the Government. He also laid emphasis on making the insurance sector more inclusive and vibrant in J&K, which he said, is among the lowest in the country and its expansion could change the socio-economic landscape of the region.

On the occasion, Murmu honoured 4 Self Help Groups, two each financed by J&K Bank and J&K Grameen Bank besides handing over the sanction letters to 10 beneficiaries from Jammu under Mudra, PMAY, MSE, Education and Housing Finance.

Earlier, Murmu launched the `Financial Inclusion Outreach Campaign’ with special focus on extending banking services to all unbanked areas, opening of bank accounts for unbanked adults under PMJDY with RuPay Cards, enrolments under PMSBY & PMJJBY, outreach for Mudra Yojna, housing loans, other retails, loans etc, credit linkage with SHGs, RSETIs and other Skilling Centres in J&K and issuance of KCCs to all eligible beneficiaries.

Speaking on the occasion, Chief Secretary, BVR Subrahmanyam talked about the UT Government’s plans to bolster the J&K economy and meet developmental goals.

“Though much has been done in this direction a long distance is still to be covered.” he said. Shedding light on the genesis of the financial inclusion, he shared his recollections about his experience of being involved with the project right since its conceptualization. He highlighted the involvement of Prime Minister Narendra Modi in the unprecedented project who ensured that it becomes a reality in less than a year across the length and breadth of the country, surprising even the experts. “I expect the banks in the UT of J&K to exhibit the same spirit and achieve the national objective”, he added.

Financial Commissioner, Finance, Arun Kumar Mehta said, “It has been the prudent vision of the Prime Minister to bring every citizen of the country in the fold of formal banking system, who would get empowered and have a sense of economic security by being associated with the basic banking system that also ensures their insurance at almost zero cost”. He added that the concept of financial inclusion revolved around extending benefits leading to financial empowerment and income generation.
Earlier in his welcome address, CMD J&K Bank (Convener JK UTLBC), R K Chhibber said that total financial inclusion is the prerequisite for making the principle of sustainable inclusive growth operational in the country’s economy.

The function concluded with a vote of thanks by Deputy General Manager, State Bank of India, Ajitav Prashar.