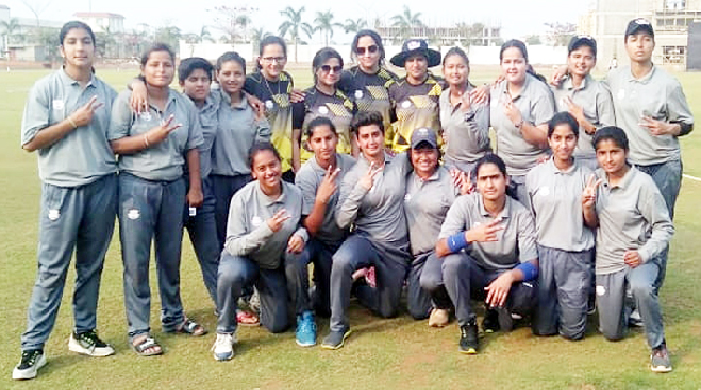 J&K women have won three out of their four matches played so far. In earlier, matches, J&K outplayed Meghalaya and Mizoram

Jammu and Kashmir eves defeated Bihar by 4 wickets to register consecutive victory in their fourth match of the Women’s Under-23 Cricket One-Day Tournament at Bhubneshwar in Odisha.
Earlier, put into bat, Bihar bundled out for 79 runs in 41.3 overs. Aradhya Raj top scored with 18 runs, while Tejeshwi contributed 10 runs to the total. From J&K, Ananya Sharma was the pick of the bowlers who took 3 wickets by conceding just 10 runs in her 10 overs, while Heena Kouser and Iqra Rasool took 2 wickets each. Bismah Hassan and Nadia Choudhary claimed 1 wicket each.
In reply, J&K sailing on Bismah Hassan’s valuable 25 runs chased the target in 31.2 overs by losing 6 wickets. Wicketkeeper batswoman Lalita and Nadia Choudhary contributed 9 runs each. For Bihar, Apurva Kumari took 3 wickets, while Aarya and Sikha Singh claimed 2 and 1 wicket respectively.
J&K women have won three out of their four matches played so far. In earlier, matches, J&K outplayed Meghalya and Mizoram. The only match J&K women lost was against Puducherry at the same venue.
J&K team is being accompanied by Payal Choudhary as manager, Neeru Manhas as coach, Surekha as trainer and Chetna Dogra as Physio.