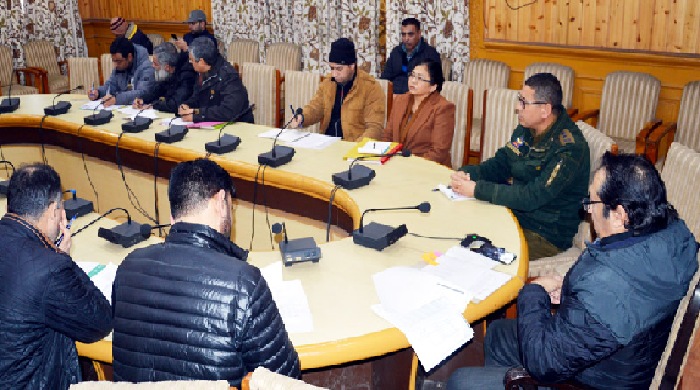 The Divisional Commissioner Kashmir Baseer Ahmad Khan today chaired a divisional level review meeting regarding the functioning of “Self Help Group (SHG) of Engineers Scheme”.
The meeting was informed that the government has formulated a scheme known as “Self Help Group Of Engineers Scheme” to provide them gainful source of livelihood in the shape of works contract to the engineers as an alternative to government jobs.

The Directorate of Employment took the initiative and till date 694 Self Help Groups (SHGs) of Engineers have been registered in which 2909 Degree and Diploma holders are involved.
It was further informed, since the year 2010 to November 2019, as many as 7819 works, amounting to Rs 584.18 crores have been allotted to SHGs of Engineers by line departments.

To achieve transparency in allotment of works, the Divisional Commissioner directed concerned officers to submit details of SHGs which have received the works and also of those who have not been awarded any contract. The report should clarify as to why works has not been allotted to the left out SHGs of Engineers.

Directorate of Employment was directed to circulate the complete list of 694 Self Help Groups (SHGs) of Engineers to the 38 line departments immediately, while Line Departments have been asked to clear liabilities of work done by SHGs on priority basis.

To stop subletting of work contract, Div Com directed concerned Engineers and officers to physically verify all allotted works and take strict action those SHGs who are violating the rules.
The Divisional Commissioner stressed the concerned HoDs of line departments to adhere to the 30% quota of works—which need to be allotted to Self Help Groups (SHGs) of Engineers as per guidelines.

All HoDs of Line Departments were asked to furnish a complete report regarding new construction works which have been kept aside for Self Help Groups (SHGs) of Engineers.
J&K Bank Ltd authorities were asked to ensure financial assistance as per guidelines to SHGs of Engineers on priority.