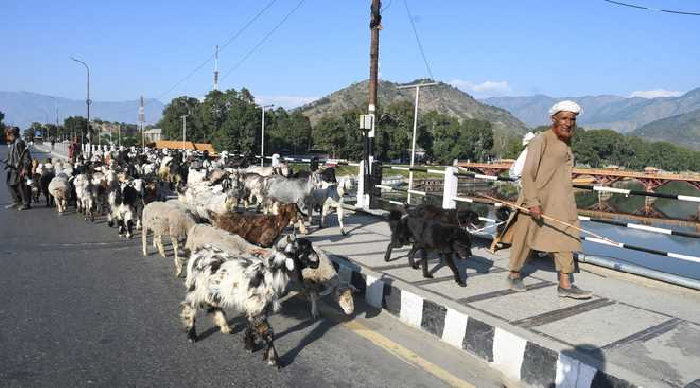 The Central Forest Right Act -2006 will largely change the socio-economic profile of Gujjars, Bakarwals and Gaddis

The Central Forest Right Act -2006 extended to Union Territory of Jammu and Kashmir through ‘Reorganization Act 2019’ passed by Parliament of India in August this year, will largely change the socio-economic profile of Gujjars, Bakarwals and other forest dweller including Gaddi and Sippis ‘ said Dr Javaid Rahi -a noted tribal researcher while presiding over a programme organised by Tribal Research and Cultural Foundation- a frontal organisation of nomads held here this.

Dr. Javaid Rahi said that the Forest Rights Act extended to Jammu and Kashmir will have multiple , forereaching and positive impact on tribal economy and livelihood of Gujjars, Bakerwals and Gaddis - the major dwellers and conservators of forests.

“The Act gave back to traditional forest dwellers their rights to freely access, independently manage and govern forest lands and all other resources related to forests, which had been controlled by the Forest Department of erstwhile State of J&K , prior to 31st of October 2019, the date of implementation of Reorganisation Act, 2019 in J&K” Dr Rahi said .

He said ,through this legislation the rights extend to tribes of Jammu Kashmir by Parliament includes, ownership and title rights to land, subject to a maximum of 4 hectares, use rights/ grazing rights to tribes, use of pastoralist route to minor forest produce (also including ownership) ,right to rehabilitation in case of illegal eviction or forced displacement, relief and development rights for basic amenities, subject to restrictions for forest protection, protection Rights and forest management rights, to protect forests and wildlife, the eligibility for ‘Forest Rights’ (to get rights) is confined to those who “primarily reside in forests” or who “depend on forests and forest land for their livelihood, right of ownership, access to collect, use, and dispose of minor forest produce, right to hold and live in the forest land for self-cultivation, for livelihood, to Scheduled Tribe or other traditional forest dwellers, for settled or transhumant community-rights , Right to protect, regenerate or conserve or manage any community forest resource which they have been traditionally protecting and conserving for sustainable use, right of access to biodiversity and community right to intellectual property and traditional knowledge related to biodiversity and cultural diversity, Traditional and customary right enjoyed by the forest-dwelling Scheduled Tribes or other traditional forest dwellers, community rights such as nistar, by whatever name called, including those used in erstwhile Princely states, Zamindari or such intermediary regimes ,Other rights as may be granted by the UT .

Other speakers demanded rapid implementation of Forest Right Act 2006 to UT as it is already 12 year as it has been extended to all the states since 2006.

“It will empower the Village committees to govern community forest resources and to democratize forest governance by securing the rights of Tribes of Jammu and Kashmir”, they said
Those who spoke include Ishtiaq Ahmad, Qasam Choudhary ,Zulkar, Sadaqat Ali, Mohammad Did, Ali Choudhary others.