Situation in Ukraine did come up for discussion during the Quad Leaders’ meet in Tokyo on Tuesday and there, India’s position on Ukraine was appreciated by the group’s members, Foreign Secretary Vinay Mohan Kwatra said during a special briefing after the conclusion of PM Modi’s two-day visit to Japan.

“Questions of regional and global importance did come up for discussion during the Quad deliberations. And there was a general understanding and all the countries present in the room discussed their perspectives of the situation in Ukraine, and there was a general and good appreciation of the position that India has taken with regard to Ukraine, which has been that immediate cessation of hostilities and path of dialogue and diplomacy to resolve this situation,” the Foreign Secretary said in response to aquery on Quad leaders’ discussion on the situation in Ukraine.

A sense of anxiety over the Ukraine situation also got reflected in the joint statement issued after the second-in person Quad Leaders’ Summit.

“With the COVID-19 pandemic still inflicting human and economic pain around the world, tendencies for unilateral actions among states and a tragic conflict raging in Ukraine, we are steadfast,” the Quad joint statement read.

In an obvious reference to China for its belligerence in the Indo-Pacific region, the joint statement said: “We strongly support the principles of freedom, rule of law, democratic values, sovereignty and territorial integrity, peaceful settlement of disputes without resorting to threat or use of force, any unilateral attempt to change the status quo, and freedom of navigation and overflight, all of which are essential to the peace, stability and prosperity of the Indo-Pacific region and to the world.”

Indicating that their resolve to free, open and inclusive Indo-Pacific aimed at peace, stability and prosperity in the region, is not merely a rhetoric, the Quad leaders in their joint statement said: “We will continue to act decisively together to advance these principles in the region and beyond. We reaffirm our resolve to uphold the international rules-based order where countries are free from all forms of military, economic and political coercion.”

At the summit, the Quad leaders also reaffirmed their unwavering support for ASEAN unity and centrality and for the practical implementation of ASEAN Outlook on the Indo-Pacific. The leaders of India, US, Japan and Australia welcomed the EU’s Joint Communication on the EU Strategy for Cooperation in the Indo-Pacific which was announced in September 2021 and increased European engagement in the Indo-Pacific region.

“We will champion adherence to international law, particularly as reflected in the UN Convention on the Law of the Sea (UNCLOS), and the maintenance of freedom of navigation and overflight, to meet challenges to the maritime rules-based order, including in the East and South China Seas. We strongly oppose any coercive, provocative or unilateral actions that seek to change the status quo and increase tensions in the area, such as the militarization of disputed features, the dangerous use of coast guard vessels and maritime militia, and efforts to disrupt other countries’ offshore resource exploitation activities,” read the joint statement.

The Quad leaders also issued a strong condemnation against all forms of terrorism, while calling for expeditiously bringing to justice the perpetrators of the Mumbai and Pathankot terror attacks. 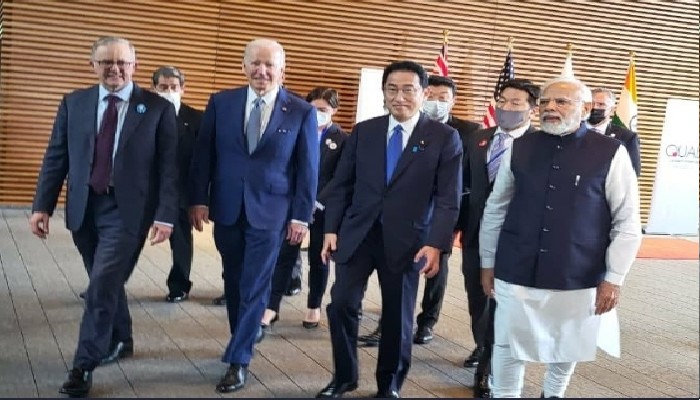 Ukraine conflict: Quad leaders call for maintaining peace and stability in the region

All countries must seek peaceful resolution of disputes in accordance with international law, they said