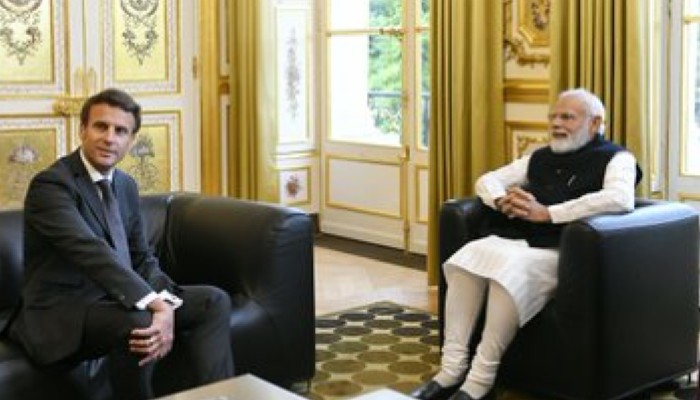 India and France have agreed on setting up a bilateral strategic dialogue on space issues, in order to address the contemporary challenges that have arisen in space, in particular maintaining a secure access to space for all.

A Joint Statement issued after Prime Minister Narendra Modi and French President Emmanuel Macron met in Paris on Wednesday said that this will build on a great tradition of over 60 years of technical and scientific space cooperation.

This strategic dialogue will bring together experts from space and defence agencies, administration and specialised ecosystem to discuss security and economic challenges in outer space, the norms and principles applicable to space as well as unveil new areas of cooperation.

"The two sides agreed to hold the first dialogue this year at the earliest," the Joint Statement said.

Prime Minister Modi, who visited France on his way back from the 2nd India-Nordic Summit in Copenhagen, Denmark, held talks with President Macron in one-on-one and delegation level formats.

The two leaders also took stock of the regional and global security outlook and discussed ways to work together in making the India- France Strategic Partnership a force for global good. Prime Minister Modi's visit to France displayed the strong friendship and goodwill not only between the two countries but also between the two leaders, the MEA pointed out.

The Joint Statement noted that India and France expressed serious concern at the ongoing conflict and humanitarian crisis in Ukraine. "They unequivocally condemned civilian deaths in Ukraine and called for an immediate cessation of hostilities to bring parties together to promote dialogue and diplomacy to find an immediate end to the suffering of the people," it said.

The two leaders discussed the regional and global implications of the conflict in Ukraine and agreed to intensify coordination on the issue.

"India and France express deep concern about the current aggravation of global food security and nutrition, already impacted by the Covid-19 pandemic, and especially in developing countries," the statement said.

The two sides also discussed the situation in Afghanistan.

"On Afghanistan, India and France expressed serious concern on the humanitarian situation and violation of human rights and reiterated strong support for a peaceful, secure and stable Afghanistan, emphasizing respect for its sovereignty, unity and territorial integrity and non-interference in its internal affairs," the Joint Statement said.

During the Modi-Macron talks, both sides welcomed the ongoing intense cooperation across all defence domains.

India and France underscored that the long-standing armament cooperation is testimony to the mutual trust between the two sides. The six Scorpene submarines built at MDL in Mumbai illustrates the level of transfer of technology from France to India, in line with the "Make in India” initiative. As seen in the timely delivery of the Rafale despite the pandemic, the two sides enjoy synergy in the field of defence, the Joint Statement noted.

"Taking forward this momentum, and based on their mutual trust, both sides agreed to find creative ways for France’s deeper involvement in the "Atmanirbhar Bharat” (Self-reliant India) efforts in advanced defence technology, manufacturing and exports, including through encouraging increased industry to industry partnerships," the Joint Statement said.

India and France also agreed to join forces in promoting cyber norms and principles in order to counter cyber threats and agreed to upgrade their bilateral cyber dialogue with a view to contributing to a peaceful, secure and open cyberspace.

The talks also covered ongoing counter-terrorism cooperation, with both sides strongly condemning all forms of terrorism including use of terrorist proxies and cross-border terrorism.

India and France also underlined the premier strategic partnerships for advancing peace, stability and prosperity in the Indo-Pacific region.

India and France have been strategic partners since 1998.

The Joint Statement noted that the strategic partnership is anchored on the solid bedrock of deep and consistent mutual trust, abiding faith in strategic autonomy, unwavering commitment to international law; and belief in a multipolar world shaped by reformed and effective multilateralism.

"Both are committed to the shared values of democracy, fundamental freedoms, rule of law and respect for human rights," the statement read. 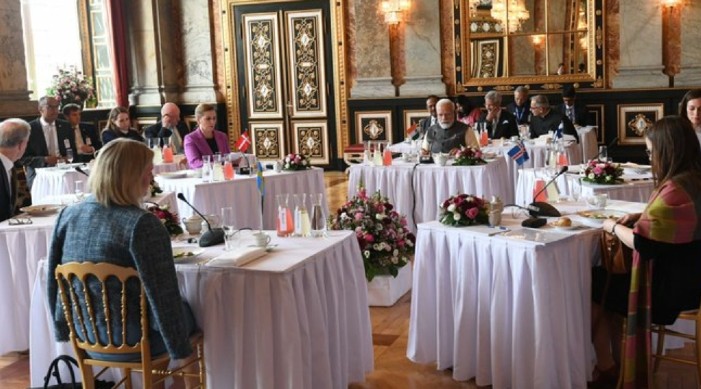