Noting that the India-Bhutan relationship, is based on a genuine concern for each other’s welfare and interests, External Affairs Minister S Jaishankar on Friday said that this relationship, rooted in history and yet forward looking, always delivers.

EAM Jaishankar, who is on an official visit to Bhutan, in his remarks at Handing Over Ceremony and E-Inaugurations, said that India’s development cooperation paradigm is unique, prompted as much by economic impulse as by moral principles and emotional bonds.

“Our gathering here today is also a celebration of your success in the fight against Covid-19 these past two years. This has been a difficult journey for all of us. I think, it is a testimony to our friendship that we have displayed the kind of solidarity that we have done in these times,” he stated.

Congratulating His Majesty the King of Bhutan who has led from the front, and the Government and the people of Bhutan, for the resilience that they have shown, Jaishankar said it was a matter of great satisfaction as well that bilateral cooperation had continued to flourish even during this difficult period.

“Given our long-standing ties and special bilateral partnership, Bhutan was the natural choice to be the first country to receive the Covishield vaccines under our Vaccine Maitri Initiative,” he noted.

“Our relationship, is based on a genuine concern for each other’s welfare and interests. Prime Minister Narendra Modi has often emphasized that Bhutan being a close friend and a privileged neighbour, the friendly people of Bhutan enjoy a special place in the hearts and minds of Indians,” the Minister mentioned.

“I am happy that our traditional relations have grown in new sectors since the Prime Minister’s visit in 2019, in keeping with the wishes and aspirations of the Bhutanese people,” the EAM said.

“In this vein, financial connectivity has touched new heights through the launch of the RuPay card and the BHIM app; our two countries are collaborating closely on STEM through regular placement of Bhutanese youth in our IITs; we have successfully linked up the Start-Up systems of our two countries via structured workshops,” he said.

“Through the National Knowledge Network & the Druk-REN connection and the e-Library project, we have opened up new vistas of education and knowledge sharing between our two countries. I am also pleased to share that the INDIA BHUTAN-SAT is due to launch into space shortly,” EAM Jaishankar added.

Inaugurating three projects and dedicating these to the people of Bhutan, he said it was heartening to know that these were completed within these last two years, despite the logistical challenges posed by the COVID pandemic.

“We will continue to stand resolutely by your side through a post COVID sustainable recovery which is your current focus,” he assured.

“I am deeply touched by the gesture of hosting me and my delegation, and for the very warm and gracious hospitality that has accompanied us all along,” Jaishankar said. Noting that all visits to Thimphu and to Bhutan were always memorable, he pointed out that this one had a very special sense.

“I will return with a great sense of satisfaction that our partnership is as solid as it is special, that it always delivers results, especially in face of daunting challenges as we have experienced in the last two years and above all it responds to the wishes, aspirations and priorities of the people of Bhutan,” he said.

"Privileged to be received by His Majesty the King of Bhutan.

His vision of transforming Bhutan shapes the direction of our unique partnership," he tweeted. 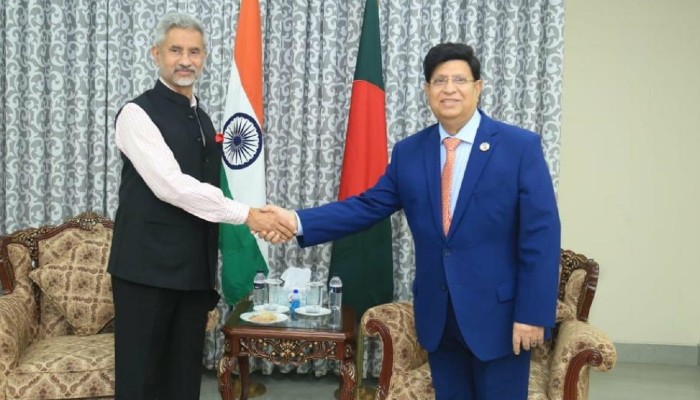