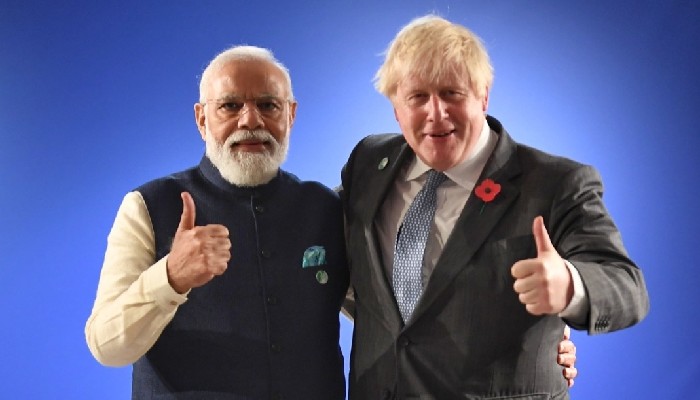 PM Narendra Modi with UK PM Boris Johnson on the sidelines of the COP 26 summit in Glasgow in November 2021.

At the invitation of Prime Minister Narendra Modi, Boris Johnson MP, Prime Minister of the United Kingdom will pay an official visit to India on April 21-22, said a statement of the Ministry of External Affairs.

Prime Minister Johnson will be accorded a ceremonial welcome at Rashtrapati Bhavan and will hold bilateral consultations with the Prime Minister on April 22, the statement added.

Besides official engagements in New Delhi, the Prime Minister of the United Kingdom will also visit Gujarat on April 21.

India and the United Kingdom enjoy a long and historical relationship which was elevated to a Comprehensive Strategic Partnership during the India-UK Virtual Summit in 2021, the MEA statement noted.

The Prime Ministers will review implementation of the Roadmap 2030 and set their vision for further intensifying cooperation across the full spectrum of bilateral ties, it mentioned.
They will also exchange views on regional and global issues of mutual interest, the statement added.

Speaking ahead of the visit, Prime Minister Boris Johnson said, “As we face threats to our peace and prosperity from autocratic states, it is vital that democracies and friends stick together.
India, as a major economic power and the world’s largest democracy, is a highly valued strategic partner for the UK in these uncertain times,” he stated further.

“My visit to India will deliver on the things that really matter to the people of both our nations – from job creation and economic growth, to energy security and defence,” the Prime Minister added.

A statement by the British High Commission (BHC) in New Delhi said that the UK Prime Minister will visit India this week "to deepen our long-term partnership for peace and prosperity with a fellow leading democracy, in the face of global economic challenges and threats from autocratic states".

The visit will begin in Ahmedabad on April 21 to meet with leading businesses and discuss the UK and India’s thriving commercial, trade and people links, it informed.

According to the BHC statement, it will be the first time a UK Prime Minister has visited Gujarat, India’s fifth largest state and the ancestral home of around half of the British-Indian population in the UK.
The UK Prime Minister will then travel to New Delhi to meet Prime Minister Modi on April 22, it said.

The leaders will hold in-depth talks on the UK and India’s strategic defence, diplomatic and economic partnership, aimed at bolstering our close partnership and stepping up security co-operation in the Indo-Pacific, the BHC statement said.

In Gujarat, the Prime Minister Johnson is expected to announce major investment in key industries in both the UK and India, boosting jobs and growth at home, as well as new collaboration on cutting-edge science, health and technology, it further stated.

The British PM will use the visit to drive progress in the Free Trade Agreement negotiations launched earlier this year – a deal with India is predicted to boost our total trade by up to £28 billion annually by 2035 and increase wages across the UK by up to £3 billion, the BHC statement further said.