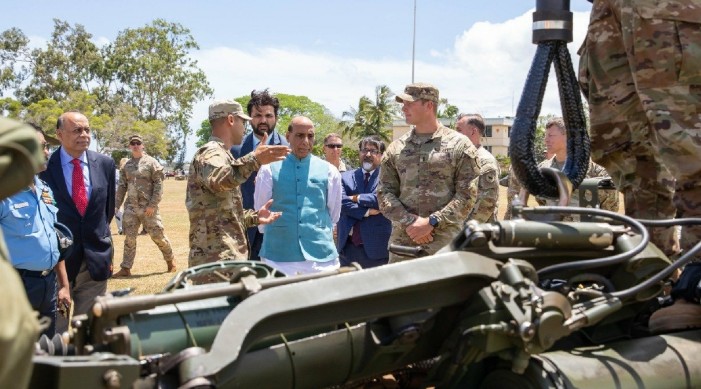 Rajnath Singh visits a US Army, Pacific training site during his visit to Hawaii on Wednesday.indo-pacific

India and US share a common vision of a free, open, inclusive and rule-based Indo-Pacific and Indian Ocean region

On his arrival from Washington DC, Singh was received by Commander US INDOPACOM Admiral John Aquilino.

Singh also visited the Pacific Fleet and the training facilities in Hawaii on Wednesday before returning to India on Thursday.

"Visited various training sites of @USARPAC located around the island of Oahu. The Military to Military relationship between India and the United States has been strengthened in recent years," Defence Minister Singh tweeted.

The United States Indo-Pacific Command and Indian military have wide-ranging engagements, including a number of military exercises, training events and exchanges, which are expected to widen in scope against the backdrop of China's continuing belligerence in the Indo-Pacific.

India, the US and several other world powers have been talking about the need to ensure a free, open and thriving Indo-Pacific in the backdrop of China’s rising military manoeuvring in the region. China claims nearly all of the disputed South China Sea, though Taiwan, the Philippines, Brunei, Malaysia and Vietnam all claim parts of it. Beijing has built artificial islands and military installations in the South China Sea.

Singh along with External Affairs Minister S Jaishankar reached the US on Sunday to attend the India-US ‘2+2’ Ministerial Dialogue in Washington on Monday – the first under the Biden administration which chalked out an ambitious agenda to take forward defence ties.

The US side was represented by US Secretary of State Antony Blinken and US Secretary of Defence Lloyd Austin at the dialogue. Before the 2+2 Dialogue, Singh held a bilateral meeting with Austin in the Pentagon. They also attended a virtual meeting between US President Joe Biden and Prime Minister Narendra Modi.