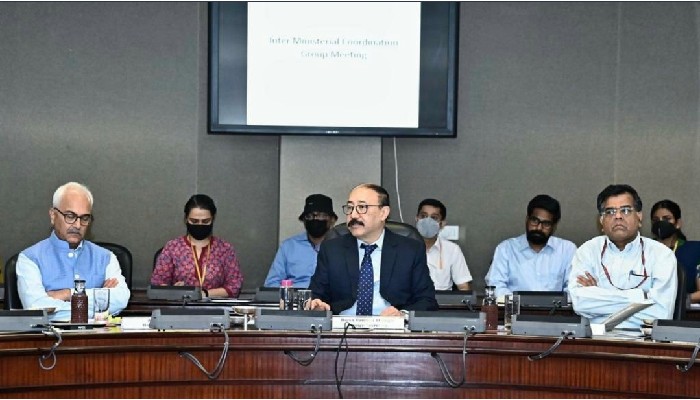 Senior officials from a number of ministries attended the first meeting of the Inter-Ministerial Coordination Group (IMCG) convened by Foreign Secretary Harsh Vardhan Shringla in connection with India's Neighborhood First policy on Tuesday.

Sources said the issues considered in the meeting on India’s neighbours included:

• Construction of border infrastructure that would facilitate greater trade with neighbours like Nepal.

• Special needs of countries such as Bhutan and Maldives in terms of supply of essential commodities.

• Humanitarian assistance to Afghanistan and Myanmar.

In addition to the IMCG mechanism, Ministries and Departments have been requested to accord priority to India’s neighbours in their international activities, programmes and projects, the sources said.

Senior officials from the Cabinet Secretariat, National Security Council Secretariat as well as other relevant agencies along with heads of Border Guarding Forces also participated in the meeting.

According to the Ministry of External Affairs (MEA), the IMCG has been set up as a high-level mechanism towards mainstreaming of India’s ‘Neighbourhood First’ policy, in line with the vision of Prime Minister Narendra Modi.

The IMCG is supported by Inter-Ministerial Joint Task Forces (JTF) convened by the concerned Joint Secretaries in the MEA.

The Government of India’s efforts to deliver benefits like greater connectivity, stronger inter-linkages and greater people-to-people connect under India’s Neighbourhood First policy takes place through a whole-of-government approach with coordination involving various Ministries, Departments and agencies of GOI and of concerned State governments.

The IMCG is meant to further improve institutional coordination across government and provide comprehensive direction to this whole-of-government approach on India’s relations with its neighbouring countries.