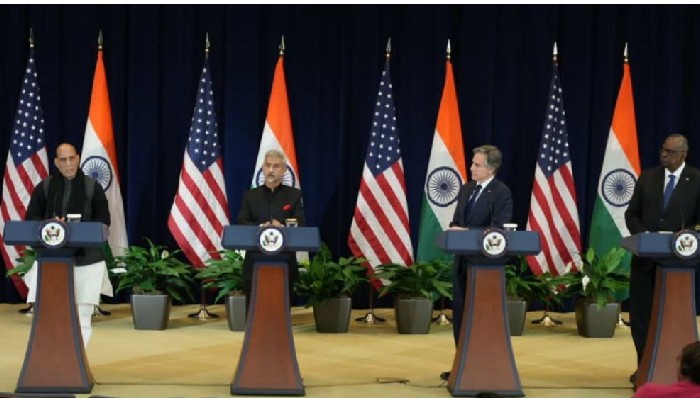 When it comes to Russian oil, India’s monthly purchases amount to less than what Europe buys in an afternoon, External Affairs Minister S Jaishankar has said.

“If you're looking at energy purchases from Russia, I'd suggest that your attention should be focussed on Europe. We do buy some energy, which is necessary for our energy security. But I suspect, looking at figures, our total purchases for the month would be less than what Europe does in an afternoon,” Jaishankar said at a joint press conference after the 4th India-US 2+2 Ministerial Dialogue in Washington DC.

Jaishankar pointed out that India had made a number of statements on the Russia-Ukraine war, including at the United Nations, in the parliament and other forums.

"And briefly, what those positions state is that we are against the conflict. We are for dialogue and diplomacy. We are for urgent cessation of violence, and we are prepared to contribute in whatever way to these objectives," he asserted.

The India-US 2+2 Ministerial Dialogue came shortly after a Virtual Summit between Prime Minister Narendra Modi and US President Joe Biden.

Speaking at Monday's news briefing, White House Press Secretary Jen Psaki too came in India's defence on the issue of oil purchase. She noted that its total purchase was less than one and two per cent as against 10 per cent from the United States.

"Did the President get a commitment from Prime Minister Modi not to accelerate or increase imports of Russian energy?" White House Press Secretary Jen Psaki was asked during her daily news conference.

"I'll let Prime Minister Modi and the Indians speak to that. Again, it's 1 to 2 per cent at this point in time. They import 10 per cent from the United States. It is not a violation of any sanctions or anything along those lines. It was a constructive, direct conversation. But I will let them speak for themselves," she said.

Psaki also noted that India had spoken out against the violence in Bucha.