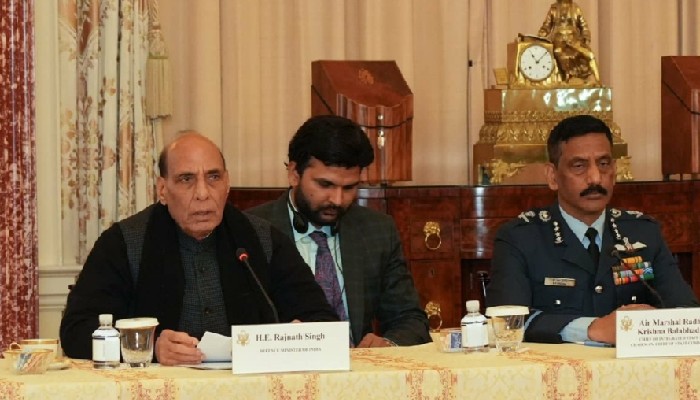 Describing the 4th India-US 2+2 Mnisterial Dialogue in Washington DC as "very meaningful", Defence Minister Rajnath Singh on Tuesday said that it will help in "strengthening the strategic defence engagement" between the two countries.

"Had a very meaningful and in-depth discussion at the 2+2 ministerial meeting in Washington DC. During the meeting, we shared our assessments of the situation in our neighbourhood and (the) Indian Ocean Region. India-US Defence Cooperation is being further expanded and strengthened," the Minister tweeted.

India and the US reaffirmed their commitment to promote regional stability and rule of law at the meeting.

Defence Minister Singh and External Affairs Minister S Jaishankar led the Indian delegation. The US delegation was led by Secretary of State Antony Blinken and Secretary of Defense Lloyd Austin.

Over the years, the strategic bilateral relationship with US including the dialogues held in the 2+2 format, have produced tangible and far-reaching results for India. The latest dialogue enabled both sides to undertake a comprehensive review of cross-cutting issues in the India-US bilateral agenda related to Foreign Policy, Defense and Security.

“The meeting is important in strengthening the strategic defence engagement between India and the US and will enable us to work alongside in areas of mutual interest. Our increased cooperation will be critical to maintaining peace & security, and to ensure free access to global commons," said Rajnath Singh in another tweet.

"We had discussions on a range of bilateral, defence and global issues. It was heartening to note that as world’s largest democracies, we have convergence of views on most of them," Singh said in a press statement issued after the meeting.

"During the meeting, we shared our assessments of the situation in our neighbourhood and the Indian Ocean Region. The use of terrorism as an instrument of statecraft against India came up prominently," Defence Minister Singh added.

He also listed important achievements of the extensive engagement between India and the US.

These include concluding a Space Situational Awareness Agreement between the Department of Space from India and Department of Defence of USA; commencing the defence space and defence Artificial Intelligence dialogues in near future; significant progress on other initiatives and agreements under discussion; and a shared desire to increase the scope and complexity of our military exercises.

"Our military-to-military engagements have continued in spite of challenges from the Pandemic. We are also glad that India has joined the multilateral Combined Maritime Force (CMF) based in Bahrain, as an Associate Partner. This will strengthen cooperation in regional security in the Western Indian Ocean. We are on course in effectively implementing COMCASA, and complete implementing of BECA," Singh pointed out.

India and the US have agreed to explore further cooperation in the fields of Defence, Cyber, Special Forces and expanding the scope of logistics cooperation under LEMOA and during joint exercises, he added.

Both sides also agreed on the need to revitalise the Defence Technology and Trade Initiative (DTTI) with joint projects on advanced and emerging and critical military technologies, to be executed quickly.

During the discussion, Minister Singh also shared India’s desire to take this partnership towards co-development and co-production with US companies and called for increased investments by US defence companies in India under the ‘Make in India’ programme.

Participation of US entities in Industrial collaboration and partnership in research and development will be critical for success of India’s ‘Aatmanirbhar Bharat’ campaigns, he added.

Defence Minister Singh thanked both the Secretaries and their delegations for an "excellent interaction" and appreciated their commitment to India- US bilateral relations.