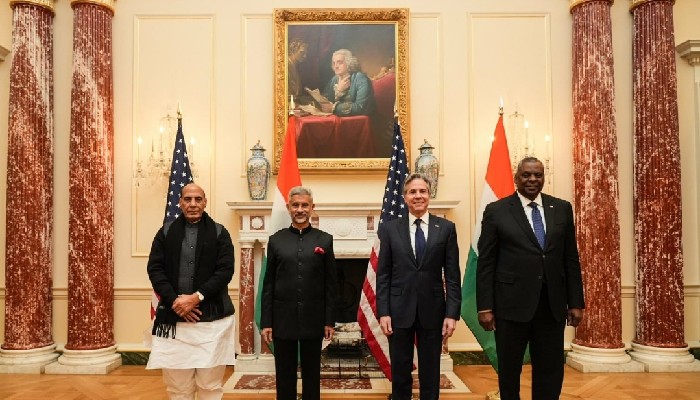 India and the US on Monday reaffirmed the importance of the India-US Comprehensive Global Strategic Partnership to international peace and security.

The Dialogue was preceded by a virtual meeting between Prime Minister Narendra Modi and President Joseph Biden.

“Building upon the September 2021 meeting between President Biden and Prime Minister Modi, and their respective participation in Summits related to COVID-19, climate, infrastructure and supply chain resilience, the Ministers reaffirmed the importance of the India-U.S. Comprehensive Global Strategic Partnership to international peace and security,” the Joint Statement noted.

The Ministers reviewed mutual efforts to respond to the worsening humanitarian crisis in Ukraine and assessed its broader implications, it said.

They urged an immediate cessation of hostilities. The Ministers unequivocally condemned civilian deaths, it added.
They underscored that the contemporary global order has been built on the UN Charter, respect for international law, and the sovereignty and territorial integrity of all states, the statement said.

The Ministers welcomed the progress made in the last year on developing a positive and constructive agenda for the Quad to deliver peace and prosperity to the region in pursuance of their shared vision for a free, open, and inclusive Indo-Pacific.

Welcoming the remarkable progress made under the Quad Vaccine Partnership to augment the manufacturing capacity of the Biological E facility in India, supported by the U.S. International Development Finance Corporation (DFC), the Ministers committed to expedite delivery of the first batch of vaccines to countries of the Indo-Pacific and beyond and to diversify the basket of vaccines in the context of changes in the global demand and supply landscape, the statement said.

Considering growing national security threats from both state and non-state malicious cyber actors, the Ministers recognized the importance of an open, interoperable, secure, and reliable Internet and stable cyberspace, it added further.

The Ministers called on the Taliban to abide by UNSC Resolution 2593 (2021), which demands that Afghan territory must never again be used to threaten or attack any country or to shelter or train terrorists, or to plan or finance terrorist attacks, the Joint Statement said.

The Ministers urged the Taliban to adhere to these and all other commitments; respect the human rights of all Afghans, including women, children, and members of minority groups; and uphold freedom of travel.

They also emphasized the importance of an inclusive Afghan government and unhindered access for the United Nations and its implementing partners to deliver humanitarian assistance, the statement added.

The Ministers recommitted to close consultations on Afghanistan to help facilitate an inclusive and peaceful future for all Afghans.

According to the statement, the Ministers commended the significant and continuing progress in the India-U.S. Major Defense Partnership.

Drawing on the momentum from the India-U.S. Defense Policy Group meeting in October 2021, they reaffirmed their ambitions for building an advanced and comprehensive defense partnership in which the U.S. and Indian militaries coordinate closely together across all domains, it maintained.

The Ministers acknowledged the importance of deepening collaboration in science and technology in the India-U.S. Joint Technical Group (JTG), and in evolving new defense domains, including space, artificial intelligence (AI), and cyber, it said.

The Ministers underscored the importance of cooperation in space and welcomed plans to conduct an inaugural Defense Space Dialogue in 2022, the statement said.

They welcomed the second Defense Cyber Dialogue held in 2021 and look forward to the next round this year, it informed.

The ministers also decided to hold an inaugural AI Dialogue this year to harness opportunities for joint innovation and cooperation in new domains.

As information-sharing forms an important pillar of the India-U.S. defense cooperation, the Ministers underlined the importance of building a comprehensive framework under which our militaries are equipped to exchange information in real time across domains.

The Ministers welcomed progress made toward full implementation of the Basic Exchange and Cooperation Agreement (BECA) to support the exchange of geospatial information, the statement said.

Acknowledging that the navies have been a driving force in advancing the United States and India’s shared interests in the Indian Ocean Region and the wider Indo-Pacific, the Ministers discussed opportunities to further advance and deepen maritime cooperation, including in underwater domain awareness, it said.

The Ministers strongly condemned any use of terrorist proxies and cross-border terrorism in all its forms and called for the perpetrators of the 26/11 Mumbai attack, and Pathankot attack, to be brought to justice, it added.

They called for concerted action against all terrorist groups, including groups proscribed by the UNSC 1267 Sanctions Committee, such as al-Qa’ida, ISIS/Daesh, Lashkar-e-Tayyiba (LeT), and Jaish-e-Mohammad (JeM), and Hizb ul Mujahideen, the statement further said.

The Ministers called on Pakistan to take immediate, sustained, and irreversible action to ensure that no territory under its control is used for terrorist attacks, it said.

The Ministers committed to continued exchange of information about sanctions and designations against terror groups and individuals, countering violent radicalism, use of the Internet for terrorist purposes, and cross-border movement of terrorists, it said.

The Ministers also emphasized the importance of upholding international standards on anti-money laundering and combating the financing of terrorism by all countries, consistent with FATF recommendations, it said.

Building upon the recent Senior Officials Meeting between the U.S. Department of Homeland Security and India’s Ministry of Home Affairs, both sides looked forward to reconvening a Ministerial meeting of the India-U.S. Homeland Security Dialogue in 2022.