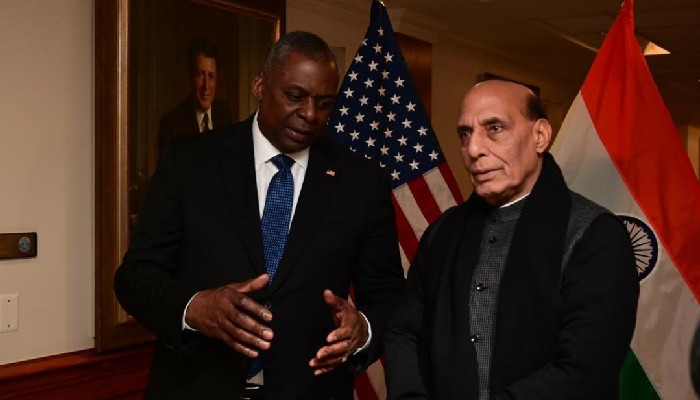 Rajnath Singh had earlier met with US aerospace & defence majors

Defence Minister Rajnath Singh held a bilateral meeting with his US counterpart Secretary of Defence Lloyd Austin ahead of the 4th India-US 2+2 Ministerial Dialogue on Monday.

The Indian Defence Minister was welcomed by the US Secretary of Defence in an enhanced honour cordon ceremony at the Pentagon.

Singh had earlier met with US aerospace & defence majors Boeing and Raytheon after reaching Washington DC.

He exhorted the companies to take advantage of policy initiatives in India to steadily march from ‘Make in India’ towards ‘Make for the World’, the Ministry of Defence said on Twitter.

Defence Minister Singh along with External Affairs Minister S Jaishankar is in Washington to participate in the 4th India-US 2+2 Ministerial Dialogue.

Secretary of State Antony Blinken and Secretary of Defence Austin will represent the US. Both sides will review bilateral cooperation across domains and chart the way forward for the two countries.

Tweeting before his US visit, Defence Minister Singh had said, "I would be leaving New Delhi tonight for a visit to the United States from April 10 to April 15. I look forward to attend the Fourth India-US 2+2 Ministerial Dialogue in Washington DC. Also, I shall be visiting INDOPACOM headquarters in Hawai, during this visit".

"The visit to the United States will give me an opportunity to hold talks with @SecDef and @SecBlinken alongside @DrSJaishankar on ways to deepen the India-US strategic partnership.

Looking forward to fruitful interactions during the visit," Singh had added.