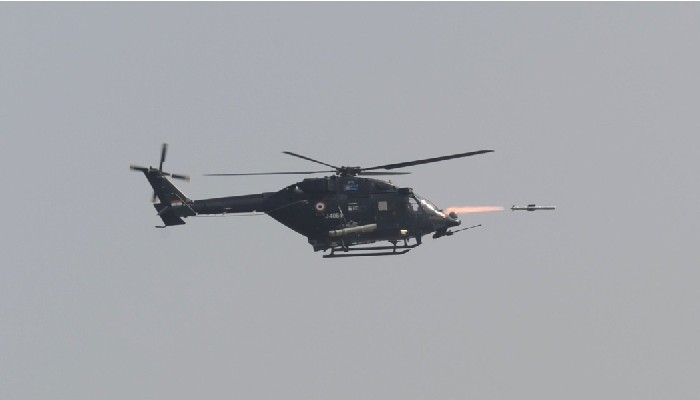 The flight trials were conducted from an Advanced Light Helicopter (ALH).

The missile has been designed and developed indigenously by DRDO

The flight trials were conducted from an Advanced Light Helicopter (ALH) and the missile was fired successfully engaging the simulated tank target, the Ministry of Defence said.

The missile is guided by an Infrared Imaging Seeker (IIR) operating in the Lock on Before Launch mode, the ministry added.

The flight test was jointly conducted by the teams of scientists of the Defence Research and Development Organisation (DRDO), the Indian Army and the Indian Air Force, as part of the user validation trials. The trials were witnessed by senior Army commanders and senior scientists of DRDO.

The Defence Ministry described the missile as "one of the most advanced anti-tank weapons in the world".

The ‘Helina’ is a third generation anti-tank guided missile that can engage targets both in direct hit mode as well as top attack mode. It has an all-weather day-and-night capability and can defeat battle tanks with conventional armour as well as with explosive reactive armour.

"In continuation to validation trials conducted at Pokhran, proof of efficacy at high altitudes paves the way for its integration on ALH," said the defence ministry.