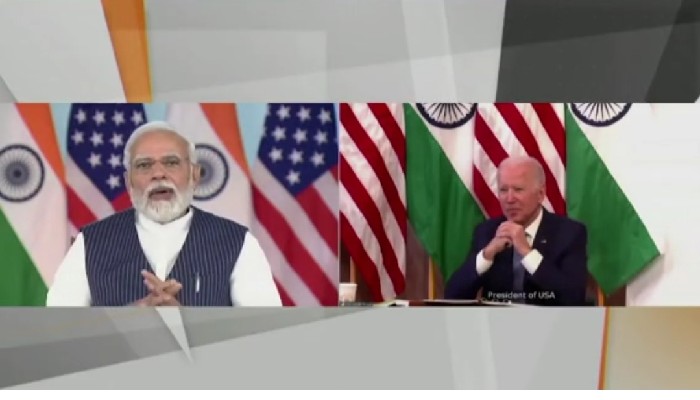 Prime Minister Narendra Modi and US President Joe Biden during a Virtual Summit on Monday.

Describing the situation in Ukraine as a matter of "concern" during his Virtual Summit with US President Biden, Prime Minister Narendra Modi on Monday stressed on the importance of direct talks between the Russian and Ukrainian Presidents.

PM Modi pointed out that he had talked to the Russian and Ukrainian Presidents several times on the phone and appealed for peace.

He had suggested to President Putin that he should hold direct talks with the Ukrainian President, the Prime Minister added.

During the Virtual Summit, the Prime Minister also reiterated India's support for an independent probe into the killings in the Ukrainian city of Bucha.

Defence Minister Rajnath Singh and Minister of External Affairs S. Jaishankar, who are in Washington DC for the India-US 2+2 Ministerial Dialogue, were also present at the White House during the interaction, along with their US counterparts, Secretary of Defence Lloyd Austin and Secretary of State Antony Blinken.

Speaking about the situation in Ukraine, PM Modi said India had accorded high importance to the safety of civilians and to providing humanitarian aid.

India had sent humanitarian and medical aid to Ukraine and its neighbouring countries. "One more medical consignment will be sent soon," he said.

The Prime Minister also referred to the evacuation of Indian nationals from Ukraine.

'India, US are natural partners'

As the world's largest and oldest democracies, India and the US were natural partners, PM Modi pointed out during the course of the Virtual Summit.

Describing the slogan coined by President Biden at the beginning of his term - Democracies can Deliver - as an important one, PM Modi said the success of the India-US partnership was the most meaningful way to illustrate this.

Prime Minister Modi recalled what President Biden had said during his visit to Washington in September last year and said that he completely agreed with the US President's assessment that the India-US partnership could contribute to solving many global problems.

According to the Prime Minister's Office (PMO), the two leaders had an extensive exchange of views on several regional and global issues, such as the COVID-19 pandemic, global economic recovery, climate action, recent developments in South Asia and the Indo-Pacific region, and the situation in Ukraine.

They also took stock of the significant progress made in bilateral relations in recent years, the PMO added.

Both leaders agreed that further strengthening of the India-US Comprehensive Global Strategic Partnership would be of tremendous benefit to the two countries, and would also contribute to global peace, prosperity and stability, the PMO said.