Indian, Australian startups must engage with each other: Piyush Goyal 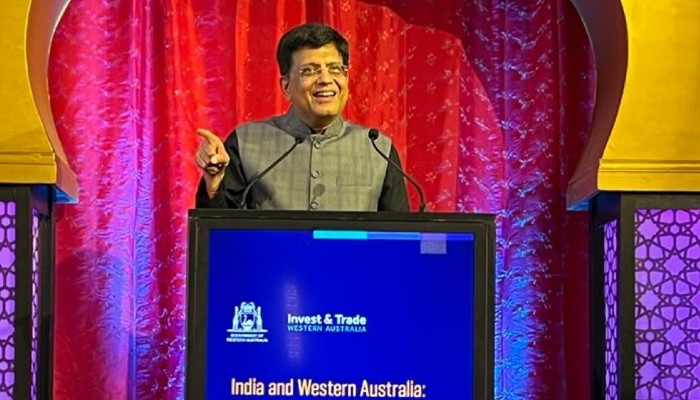 Education should also be one of the key focus areas in the India-Australia partnership, he said

Inviting Australian businesses to Make in India, Union Commerce & Industry Minister Piyush Goyal on Friday said that the startups from both nations must engage with each other.

Australia has fantastic innovations and research and new ideas and India has the talent pool to take these to the world, Goyal said, according to the Ministry of Commerce & Industry. He expressed the hope that Investments will flow into India from Australia at a faster pace.

Addressing the gathering at the Business Luncheon hosted by Western Australia Deputy Premier Roger Cook in Perth, Goyal said, "The proximity between the region and India provides an opportunity for much deeper economic engagement".

Speaking of India’s bid to build strategic partnerships, the Minister said that India has become a part of QUAD and the Supply Chain Resilience Initiative (SCRI).

Referring to the disturbances that have afflicted some parts of the world, Goyal asserted that two strong democracies, two friends working together for shared prosperity, trusting each other, believing in each other would send a strong message of unity, a message of ‘ekta’ to the world.

“Together we will make our geopolitical presence stronger and work to maintain the Indo-Pacific area as a region of peace, prosperity, stability, tranquility and growth,” he was quoted as saying by the Ministry of Commerce & Industry.

Talking about the India-Australia Economic Cooperation and Trade Agreement (Ind-Aus ECTA) which has just been signed, he said this will take relationships between the nations to greater heights.

Outlining areas of focus under the agreement such as education, research, innovation, technology, manufacturing etc, the Minister called for deepening engagements in areas such as the space sector and sustainability.

The Minister termed the agreement as an important milestone which will contribute to development of many multi-sectoral relationships. “This is but one step in a long journey and I hope that this journey will not be just a trot but a marathon,” he said.

Later, delivering the keynote address at a tourism event in Perth, Goyal said that education should be one of the key focus areas in the partnership between India and Australia.

He called for further mutual recognition of each other’s education systems, efforts to take technology to students on both sides of the ocean and exploring ways to have dual degrees.