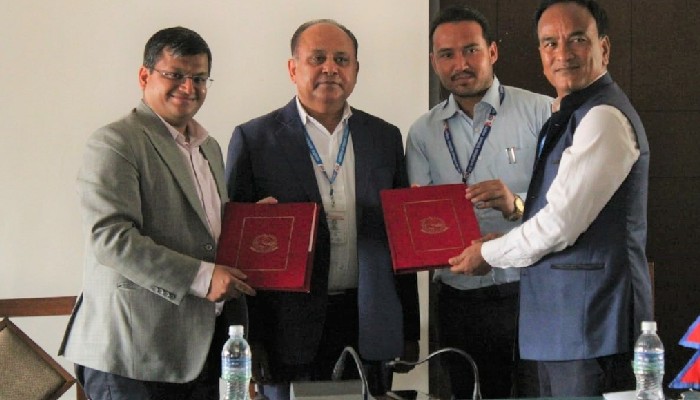 Since 2003, India has taken up over 524 High Impact Development Projects in Nepal

Taking forward their development cooperation, India and Nepal on Thursday signed three Memorandum of Understanding (MoUs) for construction of a school, a health post building and an irrigation project in Nepal at an estimated cost of NRs. 70.87 million.

The Embassy of India and the Ministry of Federal Affairs and General Administration, Government of Nepal signed the MoUs for community development projects to be built under the India-Nepal Development Cooperation, said a statement of the Indian Embassy in Nepal.

India is funding the construction of the three projects at a total estimated cost of NRs.70.87 million for the construction of Janabikash Secondary School (NRs. 33.74 million); construction of Earcoat Health Post Building (NRs. 25.36 million) and Maheshfaat Irrigation Project (NRs.11.77 million) in Darchula and Dhading districts, the Indian Embassy statement said.

The construction of these projects will provide better education facilities and better health care facilities for the locals and will help local farmers to enhance irrigated agriculture and crops production, thereby raising their livelihood and improving the economic status of the people, it stated.

Since 2003, India has taken up over 524 High Impact Development Projects (HICDPs) in Nepal and has completed 467 projects in the areas of health, education, drinking water, connectivity, sanitation, and creation of other public utilities across all 7 provinces of Nepal at the grassroots level, the statement said.