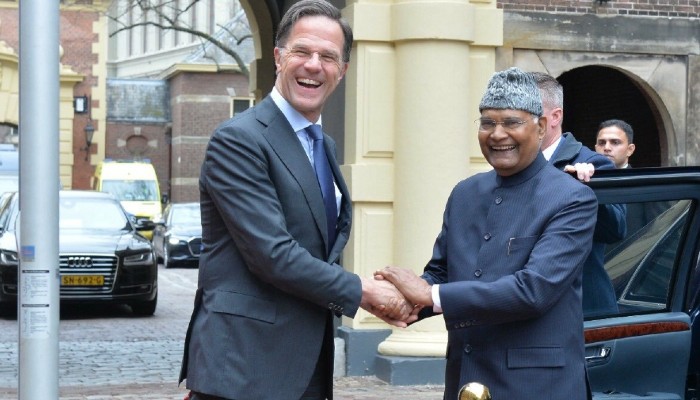 President Ram Nath Kovind with Dutch Prime Minister Mark Rutte during his visit to the Netherlands.

India and the Netherlands signed four agreements in the sidelines of the state visit by President Ram Nath Kovind this week.

According to the Ministry of External Affairs (MEA), these documents are:

(i) Extension of MoU on bilateral cooperation in the field of Ports, Maritime Transport and Logistics

(ii) Extension of the Programme of Cooperation between Department of Biotechnology, Government of India and Ministry of Economic Affairs, Agriculture and Innovation, Government of the Netherlands

(iii) MoU for the Cosmos Malabaricus Project between Leiden University and the Kerala Council of Historical Research, National Archives of the Netherlands on digitizing 17th century archives and making them available to Indian and International researchers

(iv) Extension of MoU with State Archives Department, Kerala and National Archives of the Netherlands on the execution of the Shared Cultural Heritage Programme.

In his meeting with His Majesty King Willem-Alexander, President Kovind highlighted the natural partnership and synergies between India and the Netherlands as two democracies, major economies, drivers of innovation and technology and as key advocates of free and open Indo-Pacific, the MEA said.

They discussed ways to further strengthen cooperation in priority sectors of water, agriculture, health, climate and clean energy, people-to-people and cultural cooperation. Both the leaders also exchanged views on current regional and global developments, including Ukraine, the ministry added.

According to the MEA, in his discussions with the Dutch Prime Minister, President Kovind recalled the Virtual Summit held between Prime Minister Narendra Modi and Prime Minister Rutte held on 09 April 2021 and the announcement of Strategic Partnership on Water.

Both sides expressed happiness at the signing of Joint Statement on Strategic Partnership on Water on March 29, 2021 between the Minister of Jal Shakti and Dutch Minister of Infrastructure and Water which lays a roadmap for intensifying bilateral cooperation in this key sector leveraging Dutch expertise and experience in addressing a number of common water related challenges.

During the visit, the President and the First Lady laid a wreath at the National Monument in Dam Square in memory of those who sacrificed their lives in World War II and armed conflicts.

They also participated in a special ceremony at the famous Keukenhof Tulip garden to name ‘Maitri’ Tulip as a symbol of historic friendship between people of India and the people of the Netherlands.

The President addressed a gathering of Indian community and friends of India including representatives of Surinami-Hindustani community members in the Netherlands where he acknowledged the positive contribution made by them to the host country and their role as living bridge between India and the Netherlands, said the MEA.

The President and First Lady along with their Majesties King and Queen of the Netherlands also graced a special cultural performance on ‘Ramayana’ by Kalakshetra Foundation of Chennai which was co-organized by Embassy of India in Netherlands and the Indian Council of Cultural Relations (ICCR) as part of the Azadi ka Amrit Mahotsav (AKAM) celebrations.

The maiden visit of President Kovind to the Netherlands marked an important milestone as India and the Netherlands celebrate 75 years of diplomatic relations this year, the MEA said. It is also the first Head of State visit from India to Netherlands in more than three decades, the MEA added.

India and the Netherlands enjoy long-standing friendly and multi-faceted relations with a broad agenda of cooperation marked by shared values of democracy, rule of law and growing convergences on global and regional issues.

According to the MEA, President Kovind's visit reflected and reiterated the commitment to further deepen the relationship for mutual benefit of both peoples.