If India has chosen a side, it is a side of peace: EAM Jaishankar on Ukraine 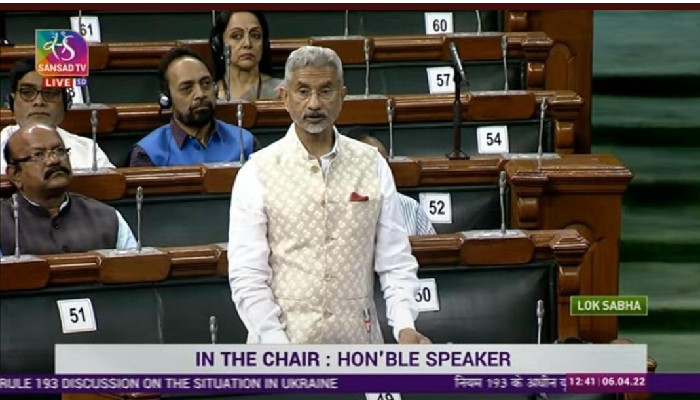 No solution was possible at the cost of innocent lives, EAM S Jaishankar said

If India has chosen a side, it is a side of peace, External Affairs Minister S Jaishankar said on Wednesday, calling for an immediate end to violence in Ukraine.

No solution can be arrived at by shedding blood & at the cost of innocent lives, he said in the Lok Sabha, even as he reiterated that India was "strongly against the conflict".

Speaking during a discussion on the situation in Ukraine, the External Affairs Minister said that India strongly condemned the killings in Bucha. EAM Jaishankar said India supported the call for an independent investigation (into what happened in Bucha).

He also explained India's position, saying that in a complex & globalised world, every nation takes into account the reality of interdependence.

"What is India advocating in Ukraine? We're, first & foremost, strongly against the conflict. We believe that no solution can be arrived at by shedding blood & at the cost of innocent lives. In this day & age, dialogue & diplomacy are the right answers to any disputes," EAM Jaishankar said.

"This should bear in mind that contemporary global order has been built on UN Charter, on respect for international law, and for the sovereignty & territorial integrity of all States. If India has chosen a side, it is a side of peace & it is for an immediate end to violence" he argued.

"Members are aware that in a complex & globalised world, every nation takes into account the reality of interdependence. Therefore even as they express their position in words and deeds, they also adopt policies that safeguard the well being of their population," EAM S Jaishankar pointed out.

He also referred to the sharp rise in international fuel prices and said, "At a time when energy costs have spiked, clearly we need to ensure that the common person in India is not subject to additional and unavoidable burden"

"Many MPs brought up the incident in Bucha and I want to say that we're deeply disturbed by the reports. We strongly condemn the killings which have taken place there. It's an extremely serious matter & we support the call for an independent investigation," EAM S Jaishankar said.