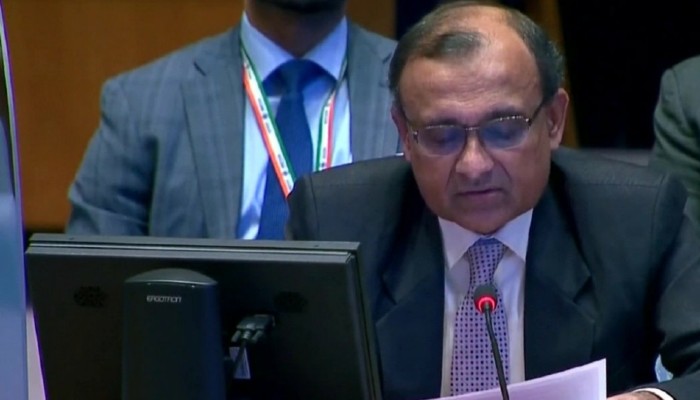 India's Permanent Representative to the United Nations TS Tirumurti speaks on Ukraine at the UN Security Council on Tuesday.

Describing recent reports of civilian killings in Bucha as "deeply disturbing", India has expressed its support for an independent investigation into it.

During a United Nations Security Council (UNSC) meeting on Ukraine on Tuesday, India also reiterated its call for immediate cessation of violence and end to hostilities.

"Recent reports of civilian killings in Bucha are deeply disturbing. We unequivocally condemn these killings and support the call for an independent investigation," India's Permanent Representative to the United Nations TS Tirumurti said at the UN Security Council.

Tirumurti pointed out that the situation in Ukraine had not shown any significant improvement since the Council last discussed the issue. "The security situation has only deteriorated, as well as its humanitarian consequences," he said.

"India continues to remain deeply concerned at the worsening situation and reiterates its call for immediate cessation of violence and end to hostilities. We have emphasized right from the beginning of the conflict the need to pursue the path of diplomacy and dialogue," he said.

According to Tirumurti, when innocent human lives are at stake, diplomacy must prevail as the only viable option. "In this context we take note of the ongoing efforts, including the meetings held recently between the Parties," he added.

Ambassador Tirumurti also referred to the impact of the Ukraine crisis, saying it "is being felt beyond the region with increasing food and energy costs, especially for many developing countries. It is in our collective interest to work constructively, both inside the United Nations and outside, towards seeking an early resolution to the conflict".

He expressed the hope that the international community would continue to respond positively to the humanitarian needs. "We support calls urging for guarantees of safe passage to deliver essential humanitarian and medical supplies," Tirumurti added.

Reiterating the importance of UN Guiding Principles of Humanitarian Assistance once again, he said humanitarian action must always be guided by the principles of humanitarian assistance - humanity, neutrality, impartiality, and independence. "These measures should never be politicized," he argued.

India's representative also emphasized to all member states of the UN that the global order is anchored on international law, UN Charter and respect for territorial integrity and sovereignty of states.