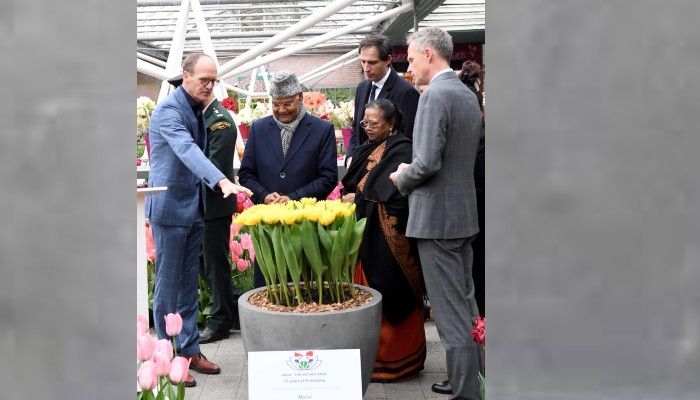 To mark 75 years of diplomatic relations between India and the Netherlands, a yellow Tulip flower was named 'Maitri' by President Kovind

Indian President Ram Nath Kovind is in the Netherlands on a three-day official visit where he will hold discussions with the top leadership of the European country. The presidential visit to the Netherlands comes after 34 years since the visit of President R Venkataraman in 1988.

He arrived in Amsterdam on Monday afternoon. On the second day of his trip on Tuesday, he visited the world-famous Tulip Garden at Keukenhof where he was received by Minister of Foreign Affairs, Netherlands Wopke Hoekstra.

Speaking on the special occasion of the 75th anniversary of diplomatic relations between India and the Netherlands, President Kovind said "Today, a new flower will bloom for India-Netherlands relations. We are naming the yellow tulip flower 'Maitri' which in Sanskrit means friendship”.

Thanking the Government of the Netherlands for this unique gesture, he also appreciated the efforts of the breeders of this beautiful new Tulip variant. “It will inspire us to work towards strengthening bonds of friendship and ties between people of India and the Netherlands," President Kovind said.

"I am very happy to be at the Keukenhof, the garden of Europe and home to the world-famous tulips. The garden attracts millions of visitors each year and heralds spring in the Netherlands. It showcases the Dutch expertise in horticulture which makes it the world's largest producer and exporter of tulips," he said.

Keukenhof, also known as the Garden of Europe, is one of the world's largest flower gardens, situated in the municipality of Lisse, in the Netherlands. The park covers an area of 32 hectares and approximately 7 million flower bulbs are planted in the gardens annually.

The Netherlands is an important economic and commercial partner of India. It is India’s fourth largest FDI source. The country also hosts the largest Indian diaspora in continental Europe.

Notably, the presidential visit to the Netherlands comes after 34 years since the visit of President R Venkataraman in 1988.

President Kovind arrived in Amsterdam from Turkmenistan where he held talks with his Turkmen counterpart Serdar Berdimuhamedov. The two sides agreed to expand bilateral trade and energy cooperation to further strengthen the multifaceted partnership. Ram Nath Kovind is the first Indian President to visit independent Turkmenistan.