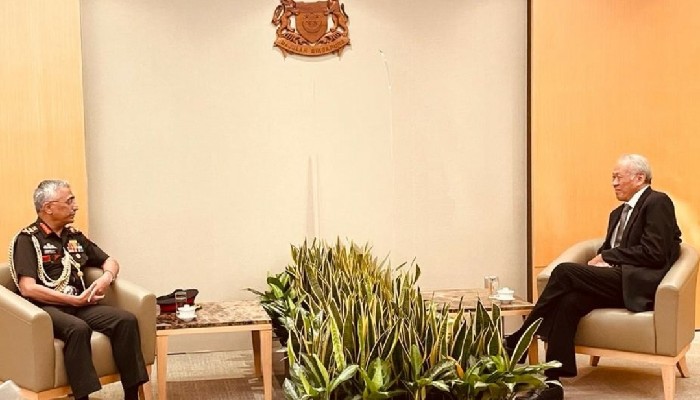 India and Singapore have reaffirmed their strong and long-standing defence ties during the ongoing visit of Indian Army Chief General Manoj Mukund Naravane.

He also called on Singapore Army Chief Brigadier General David Neo and discussed the roadmap to further enhance bilateral military cooperation between the two nations, the Indian Army said in a series of tweets.

General Naravane reviewed the Guard of Honour at the Ministry of Defence in Singapore and complimented the Guard for an impeccable turnout and parade.

On Monday, General Naravane visited the Kranji conflict memorial in Singapore. He laid a wreath at Kranji War Memorial and paid tributes to those that laid down their lives within the line of responsibility throughout World War-II.

Dedicated to soldiers from India, the UK, Australia, Canada, Sri Lanka, Malaya, the Netherlands and New Zealand who died defending Singapore and Malaya against the invading Japanese forces during the Second World War, the memorial includes the War Graves, the Memorial Walls, the State Cemetery and the Military Graves.

India and Singapore share a longstanding and comprehensive partnership in the area of defence.

General Naravane is on a three-day visit to Singapore from April 4 to April 6, to enhance military cooperation from Monday and hold talks with the senior navy and civilian management.