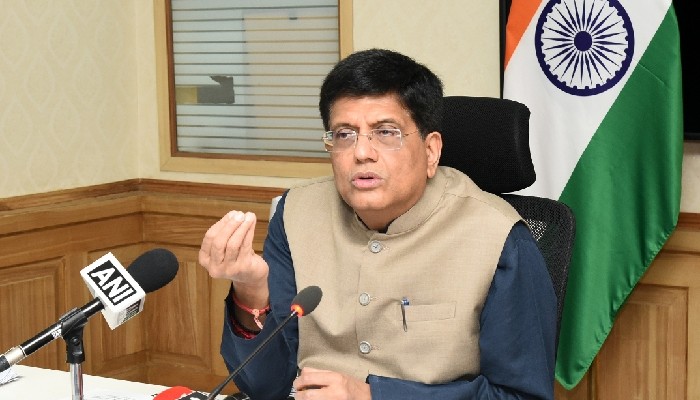 India's merchandise exports spurted to a record high of $418 billion in the financial year 2021-22 on account of higher shipments of petroleum products, engineering goods, gem and jewellery and chemicals, according to data released by the Ministry of Commerce & Industry on Sunday.

Addressing a press conference on Sunday, Union Minister of Commerce and Industry, Piyush Goyal said that India had truly gone from ‘local to global’ in response to the Prime Minister Narendra Modi’s call.

The Minister said that every Indian should be proud of the pace at which India is achieving ‘atmanirbharta’ while ensuring that every Indian benefits from this progress. Expressing confidence that India’s economy is poised to break a number of records, Minister Goyal said that PM Modi had set lofty goals for India and that our nation is extremely capable of achieving such immense goals.

The key export sectors, which contributed to record healthy growth, include petroleum products, engineering, gems and jewellery, chemicals and pharmaceuticals. The top export destinations were the US, the UAE, Bangladesh, the Netherlands, Singapore, Hong Kong, the UK, Belgium and Germany.

"Notwithstanding the challenges posed by successive waves of Covid, India's merchandise trade performance has shown impressive growth and exports remained above $30 billion for 12 consecutive months during April 2021 to March 2022," Goyal said.

Impressive growth has been seen in the Agriculture sector and especially during the pandemic, India emerged as a major global supplier of food / essential agriculture products. Agriculture exports buoyancy was driven by commodities such as rice (both basmati and non-basmati), marine products, wheat, spices and sugar, among others, recording the highest ever agricultural products export in 2021-22, said the Ministry.

Meanwhile, agriculture exports crossed $48 billion during April 2021-March 2022. Higher agricultural exports signify the ability of Indian farmers to meet the requirement of 1.35 billion population and yet produce a surplus to export to rest of the world. Integration into global market will allow our farmers to be more competitive, quality conscious and at the same time realize better prices for their produce, added Goyal.

The Minister also assured that India will step up wheat supplies to countries hit by the Ukraine War.

“We will continue to export wheat in a big way to meet needs in countries who are not getting supplies from conflict areas. We are likely to exceed our wheat exports over 10 million tonnes in 2022-23. Our farmers are focused on increasing production,” he said.

The government has been working around the clock to provide a conducive environment and infrastructure for the industry and exporters to enhance their export performance. Policies and schemes aligned with the goal are being introduced and implemented for their benefit, Goyal said.

Commodities that recorded a positive growth in exports during April 2021-March 2022 over the previous fiscal include petroleum, cotton yarn/fabrics/madeups, handloom, gems and jewellery, engineering goods ($111 billion as against $76 billion), electronic engineering products ($15.58 billion as against $11 billion), leather goods, chemicals, plastic and marine products.

Exports have also seen a significant increase to different countries, especially, developed countries, he said. The Minister added that efforts by exporters and industry associations, coordination among different departments and state governments have resulted in this stupendous achievement.

Minister Goyal said the Government is now working on rolling out the District Export Hub Initiative to strengthen the export infrastructure, logistics at district level to facilitate exports.

“We have succeeded in creating awareness about exports in every district through ODOP and PLIs,” he said.

Rigorous efforts for domestic capacity enhancement for deepening integration in the Global Value Chains are being made by working in close partnership with the industry to identify areas where India’s competitive advantages lay.

The Government is working on strengthening our capabilities and create for the world on the lines of Make in India. Production Linked Incentive (PLI) schemes for 13 key sectors of manufacturing starting from FY 2021-22 have been announced.