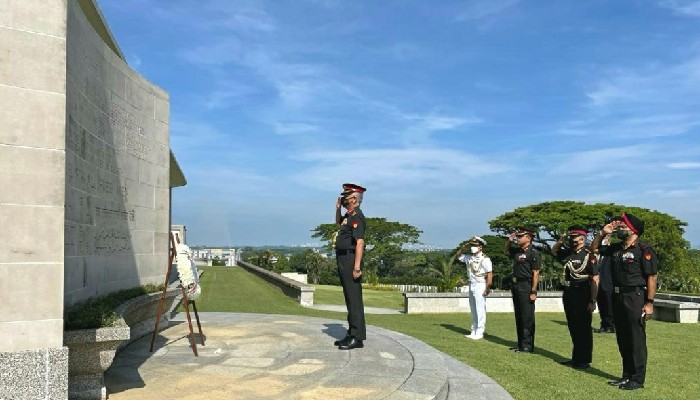 India and Singapore have a longstanding and comprehensive partnership in defence

Indian Army Chief General MM Naravane is on a three-day visit to Singapore to discuss avenues for enhancing defence relations between the two countries.

During the visit, which began on Monday, he is scheduled to call on Singapore’s Minister of Defence and the Chief of Singapore Army.

On the first day of the visit, General Naravane laid a wreath at Kranji War Memorial in Singapore and paid tributes to the soldiers who laid down their lives during the 2nd World War in Singapore, said a tweet by the Indian Army.

In the area of defence, India and Singapore have a longstanding and comprehensive partnership, says the Indian High Commission in Singapore’s page on ‘India-Singapore Relations’.

According to the website, new developments in defence include the annual Trilateral Maritime Exercise between India, Singapore and Thailand (SITMEX), announced by Prime Minister Narendra Modi in his Keynote address at the 2018 Shangri La Dialogue.

The inaugural exercise was held in September 2019 in the Andaman Sea.