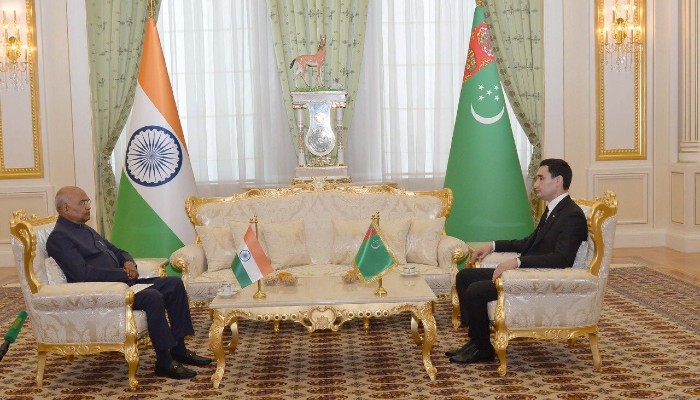 President Ram Nath Kovind who is on a four-day (April 1 to 4) visit to Turkmenistan on Saturday, held a detailed discussion with President Serdar Berdimuhamedow on issues of bilateral interests and expressed their concern on the developments in Afghanistan and their “external repercussions”.


India and Turkmenistan, “share a broad ‘regional consensus’ on the issues related to Afghanistan, which includes formation of a truly representative and inclusive government, combating terrorism and drug trafficking, central role of the UN, providing immediate humanitarian assistance for the people of Afghanistan and preserving the rights of women, children and other national ethnic groups and minorities,” a press statement issued by President Kovind’s office said.

This is the first ever visit by a President of India to Turkmenistan, and also one of the first visits hosted by the new and young leader of Turkmenistan, Serdar Berdimuhamedow.

During Ram Nath Kovind’s visit, a Memorandum of Understanding was signed between the Financial Intelligence Unit of India and the Financial Monitoring Service of Turkmenistan. The President said the agreement would strengthen the framework of economic cooperation between the two countries.

India and Turkmenistan, during the first ever presidential visit, highlighted the significance of the International North South Transport Corridor (INSTC) and the Ashgabat Agreement on International Transport and Transit Corridor.

“I pointed out that the Chabahar port built by India in Iran could be used to improve trade between India and Central Asia,” a press statement issued by President Kovind said.

The two countries also discussed cooperation in energy and in this regard, the pending TAPI pipeline project was discussed.

“On the TAPI pipeline, I suggested that issues related to security of the pipeline and key business principles may be addressed in Technical and Expert level meetings,” President Kovind said in his press statement.

“I am sure the Programme of Cooperation on Culture and Arts for the period 2022-25, signed today, will give direction to our cultural cooperation,” President Kovind said in his press statement.

The two presidents, as per the statement, emphasised on the need for both countries to cooperate closely on the effective management of the Covid-19 pandemic that has affected our population.

“I proposed that mutual recognition of Covid vaccination certificates by both countries would go a long way in facilitating travel of our citizens,” said the statement.

Turkmenistan is an important partner for India in the India – Central Asia Summit framework, the first of which India hosted virtually in January this year.

“We agreed to further enhance cooperation under the framework flowing from the India-Central Asia Summit. We welcome Turkmenistan’s readiness to send a youth delegation to India within the ambit of India-Central Asia cultural cooperation. The MoU on Youth Affairs signed today would further intensify exchanges between our youth,” President Kovind said in a statement.