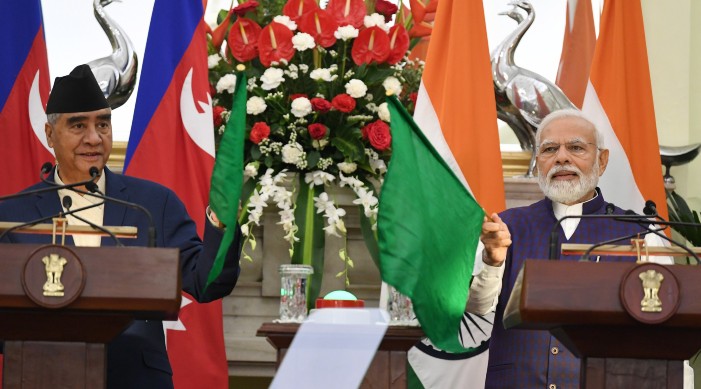 The rail link connects Jaynagar in Bihar with Kurtha in Nepal

With Prime Minister Narendra Modi and his Nepali counterpart Sher Bahadur Deuba on Saturday flagging off the first cross-border passenger train, linking Jaynagar in Bihar with Kurtha in the Himalayan nation, the two countries achieved a major milestone in the field of connectivity.

“It is a historic day in many ways for the people of India and Nepal. The first passenger train on the first cross-border broad-gauge rail link was jointly flagged off by the two Prime Ministers,” Foreign Secretary Harsh Vardhan Shringla said during a special media briefing on the three-day visit of Nepal Prime Minister Sher Bahadur Deuba.

He added that the inaugural passenger service between Jaynagar in Bihar to Kurtha in Nepal will now “connect the two countries well by rail in addition to road and air links.”

With regard to the planned construction of Kathmandu-Raxaul rail link, Foreign Secretary Shringla said the issue was discussed by the two Prime Ministers during their talks and both expressed their satisfaction over the progress made, in particular in the preparation of the Detailed Project Report of this rail link.

“We do believe that this rail link between Kathmandu and Raxaul will in many senses prove to be a game changer in the connectivity aspect of the relationship,” Shringla said.

Earlier, the MEA in a press release said the use of Indian RuPay card in Nepal was jointly launched by the two Prime Ministers.

This would open new vistas for cooperation in financial connectivity, and is expected to facilitate bilateral tourist flows as well as further strengthen people-to-people linkages between India and Nepal, the MEA said.

Both Prime Ministers also discussed the unprecedented opportunities for mutually beneficial cooperation in the energy sector, the Ministry added.

In this regard, a Joint Vision Statement on Power Sector cooperation that spells out the shared commitment as well as opportunities for win-win collaboration in power generation, transmission and trade was concluded during the visit.

Both Prime Ministers jointly inaugurated the 90 km long 132 KVDC Solu Corridor Transmission line and substation built under the Line of Credit extended by India. Both sides agreed to expedite progress in the implementation of the Pancheshwar Multipurpose Project, beginning with early finalization of the Detailed Project Report (DPR), the MEA added.

According to the Ministry, the Prime Minister of Nepal appreciated the fresh approvals granted to Nepal Electricity Authority for the export of substantial amounts of power to India. He further invited greater participation of Indian companies in Nepal’s hydropower development projects.

The progress made in the 900 MW Arun-III hydro-electric project in Nepal was also noted. Prime Minister Modi welcomed Nepal’s decision to join the International Solar Alliance (ISA), with Nepal, on 01 April 2022, becoming the 105th country to become a signatory to the Framework Agreement of the ISA, the Ministry maintained.

Both Prime Ministers also exchanged views on the economic and trade agenda and decided to accelerate action to further deepen and facilitate trade, investment and connectivity linkages, the Ministry said.

As per the MEA, Prime Minister Modi thanked Prime Minister Deuba for assuring Government of Nepal’s full support in resolving bottlenecks and facilitating the time-bound completion of all India-assisted projects, including the National Police Academy at Kavrepalanchowk, the Integrated Check Posts at Nepalgunj and Bhairahawa and the projects under the Ramayana circuit.

It was also shared with Prime Minister Deuba that under India’s ‘Azadi ka Amrit Mahotsav’ celebrations, India will inaugurate 75 development projects in Nepal this year.

On 03 April 2022, Prime Minister Deuba will visit Varanasi, a city that symbolizes the deep religious and cultural links between the two countries, the Ministry informed.

He will be received at Varanasi by Chief Minister of Uttar Pradesh, Yogi Adityanath, who will also accompany him during this leg of his stay, the MEA said.

India’s relationship with Nepal is one of the main pillars of its ‘Neighbourhood First’ policy. The visit of Prime Minister of Nepal to India will contribute in further cementing the traditional and age-old ties of friendship and cooperation between the two countries, the MEA added.