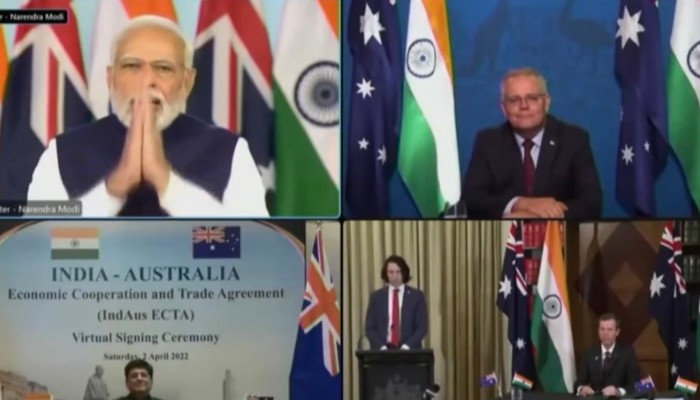 The India-Australia Economic Cooperation and Trade Agreement was signed by Union Minister of Commerce and Industry, Piyush Goyal and Australia’s Minister for Trade, Tourism and Investment Dan Tehan in a virtual ceremony in the presence of Prime Minister Narendra Modi and Prime Minister of Australia, Scott Morrison on Saturday.

Speaking on the occasion Prime Minister Narendra Modi noted that this is his third interaction with his Australian counterpart in less than a month. He conveyed his appreciation for the leadership of Prime Minister Morrison and efforts of his trade envoy and former Prime Minister of Australia Tony Abbott.

“Today, in less than a month, this is my third face-to-face interaction with my friend, Scott. We had a very productive discussion in the Virtual Summit last week. At that time, we had instructed our teams to conclude the negotiations on the Economic Cooperation and Trade Agreement at the earliest. And I am very happy that today this important agreement is being signed. For this extraordinary achievement, I heartily congratulate the Trade Ministers and their officials of both the countries,” PM Modi said.

PM Modi said that signing of IndAus ECTA in such a short span of time reflects the depth of the mutual confidence between the two countries.

Modi underlined the huge potential that exists in the two economies to fulfill the needs of each other and this agreement will enable the two countries to fully leverage these opportunities.

“This is indeed a watershed moment for our bilateral relations”, he noted. “On the basis of this agreement, together, we will be able to increase the resilience of supply chains, and also contribute to the stability of the Indo-Pacific region.”

Terming ‘people to people’ engagement as the key pillar of the relationship between India and Australia, PM Modi said “This agreement will facilitate the exchange of students, professionals, and tourists between us, which will further strengthen these relations.”

PM Modi also conveyed his wishes to the women cricket team of Australia for the upcoming World Cup final.