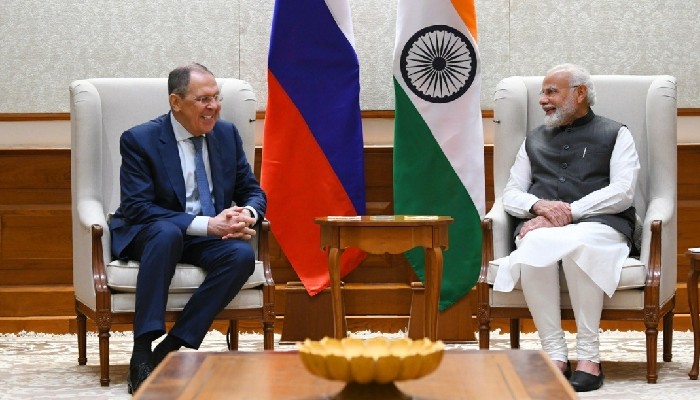 Prime Minister Narendra Modi reiterated his call for an early cessation of violence in Ukraine when Russian Foreign Minister Sergey Lavrov called on him on Friday.

The Russian Foreign Minister briefed him on the situation in Ukraine, including the ongoing peace negotiations, said the Ministry of External Affairs (MEA). The Prime Minister reiterated his call for an early cessation of violence, and conveyed India's readiness to contribute in any way to the peace efforts, the MEA noted.

The Russian Foreign Minister also updated the Indian Prime Minister on the progress of decisions taken during the India-Russia bilateral Summit held in December 2021, it added.

Russian Foreign Minister Lavrov's two-day official visit to India is the highest-ranking visit from Russia since it invaded Ukraine on February 24.

Earlier in the day, the visiting Russian Minister met with External Affairs Minister S Jaishankar and both sides assessed the overall state of cooperation. They considered the implications of recent developments on trade and economic relations. EAM underlined that as a developing economy, global volatility in different domains is of particular concern to India, a MEA statement said.

“It is important for both countries that their economic, technological and people to people contacts remain stable and predictable,” it had noted.

According to the MEA, the two Ministers discussed developments pertaining to Ukraine. Minister Lavrov briefed the Indian side from Russia’s perspective, including the ongoing talks, it added. “EAM emphasised the importance of cessation of violence and ending hostilities. Differences and disputes should be resolved through dialogue and iplomacy and by respect for international law, UN Charter, sovereignty and territorial integrity of states,” the statement had said.

The Ministers also discussed the situation in Afghanistan. “Minister Lavrov conveyed his assessment of the recent conference on Afghanistan in China,” the statement noted. EAM Jaishankar noted that UNSCR 2593 expressed the concerns of the international community and spoke of humanitarian support for the Afghan people,the MEA added.

“Iran and JCPoA issue also featured in the talks. EAM welcomed the Russian briefing on the matter,” the MEA mentioned.