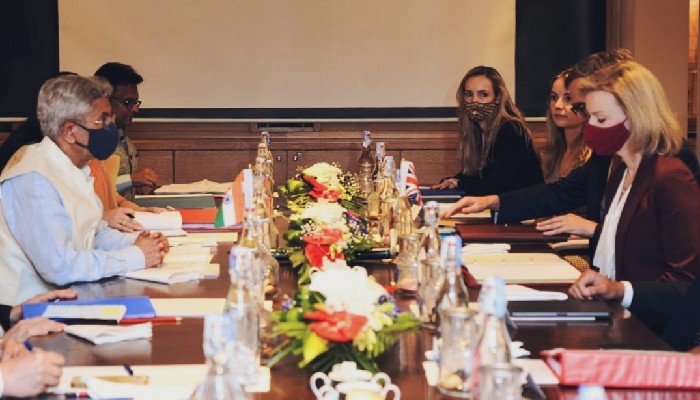 India and the UK have agreed to bolster cooperation in trade, security, and green energy sectors.

External Affairs Minister S Jaishankar on Thursday met with UK Foreign Secretary Elizabeth Truss to conduct the annual strategic review of the Roadmap 2030 agreed between the Prime Ministers during the India-UK Virtual Summit 2021.

The two Ministers expressed satisfaction on the progress achieved so far and agreed to further intensify efforts to deliver results in priority areas of trade and investments, defence and security, migration and mobility, education, S&T, climate cooperation and green energy, said a statement of the Ministry of External Affairs (MEA).

Both sides appreciated the substantial progress made in the India-UK FTA negotiations with two productive rounds already completed since their launch in January this year, the statement said.

According to the MEA, the two sides also discussed the implementation of the Migration and Mobility Partnership which has the potential to bring the people of both countries even closer.

They also discussed the modalities of instituting the Strategic Tech Dialogue to enhance cooperation on new and emerging strategic technologies like 5G, AI and quantum, it added.

The two Ministers agreed to resolve legacy issues and deepen defence and security cooperation including in defence co-development and co-production, and enhance capacities to address growing threats in the cyber, space and maritime domains, the statement further said.

India welcomed the UK’s interest in participating in its national defence manufacturing programme through Make in India and Atmanirbhar Bharat and agreed to consult intensively on this, it added.

They emphasised the need to
retain strategic focus on the Indo-Pacific region and in this context, India welcomed the readiness of the UK side in undertaking activities under the Maritime Security Pillar of the Indo-Pacific Ocean’s Initiative (IPOI), the statement noted.

IPOI is an open, inclusive, non-treaty based, global initiative that was announced by Prime Minister Modi at the 14th East Asia Summit in November 2019 to promote collaborative efforts among like-minded nations to better manage, conserve, sustain and secure the Indo-Pacific maritime domain, it stated.

The Ministers also had the opportunity to exchange views on regional and global issues of mutual interest, the statement mentioned.

On Ukraine, India reiterated that the immediate cessation of violence and return to dialogue and diplomacy is the key to long term peace in the region, it further stated.

On Afghanistan, both sides highlighted the need for Afghanistan to have unhindered access to humanitarian assistance and that Afghan territory is not used by terror outfits for destabilising the region, the statement maintained.

Iran and JCPOA also featured in the talks. They also discussed matters related to the Commonwealth and the UN Security Council, it said.

Both Ministers also participated in the inaugural edition of the India-UK Strategic Futures Forum, a new 1.5 Dialogue mechanism for expert deliberations on long term strategic links and expanding the horizons of our bilateral cooperation.