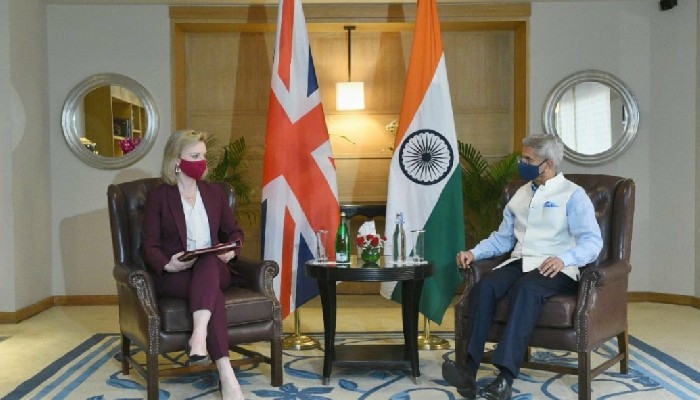 The India-UK Roadmap 2030 was on the agenda as visiting UK Foreign Secretary Liz Truss met External Affairs Minister S Jaishankar in New Delhi on Thursday. The two sides also discussed global and regional issues including the situation in Ukraine and Afghanistan.

Noted that we have made good progress on all its pillars.Promising prospects in trade and investments, defence & security, migration & mobility, S&T, education, climate cooperation and green energy," EAM Jaishankar tweeted.

"Discussed global and regional issues including the situation in Ukraine, Afghanistan, Iran and JCPOA and Indo-Pacific. Exchanged views on their implications on the global economy," he added.

The meeting took place as Russian Foreign Minister Sergey Lavrov arrived in New Delhi on what is the highest-level visit from that country since it launched the invasion of Ukraine on February 24.

Look forward to our discussions today. Working together to realise Roadmap 2030".

In the morning, the British High Commission in New Delhi had said Foreign Secretary Truss was in India "as part of a wider diplomatic push following Russia’s illegal invasion of Ukraine last month".

"In a meeting with India’s External Affairs Minister Subrahmanyam Jaishankar, the Foreign Secretary will say Russia’s invasion of Ukraine underlines the importance of democracies working closer together to deter aggressors, reduce vulnerability to coercion and strengthen global security," the High Commission had said.

She wants to counter Russia’s aggression and reduce global strategic dependence on the country ahead of key NATO and G7 meetings next week, it added.

Jaishankar and Truss also participated in the First India-UK Strategic Affairs Forum organised by the Indian Council of World Affairs (ICWA) where they put forth their respective views on the situation in Ukraine and the bilateral relationship.

Ties between the two countries were elevated to a Comprehensive Strategic Partnership during the India-UK Virtual Summit held between Prime Minister Narendra Modi and UK Prime Minister Boris Johnson on May 4, 2021.

"This would be second visit of the UK Foreign Secretary to India since the Virtual Summit and would provide an opportunity to assess the progress on the Roadmap 2030 launched during the Virtual Summit," the Ministry of External Affairs (MEA) had said on Monday.

The visit will also serve to further deepen our partnership across various sectors such as trade & investment, science, technology & innovation, defence & security, climate cooperation, education and digital communications, the MEA had pointed out.

The British High Commission said that during her trip, Truss will progress talks to develop defence-related trade, including innovative security technology, strengthening defence ties with the world’s largest democracy.

“Deeper ties between Britain and India will boost security in the Indo-Pacific and globally, and create jobs and opportunities in both countries," Truss was quoted as saying by the British High Commission in India.

“This matters even more in the context of Russia’s unprovoked invasion of Ukraine and underlines the need for free democracies to work closer together in areas like defence, trade and cyber security," she said.

“India is an economic and tech powerhouse, the world’s largest democracy and a great friend of Britain, and I want to build an even closer relationship between our two nations,” Truss was quoted as saying.