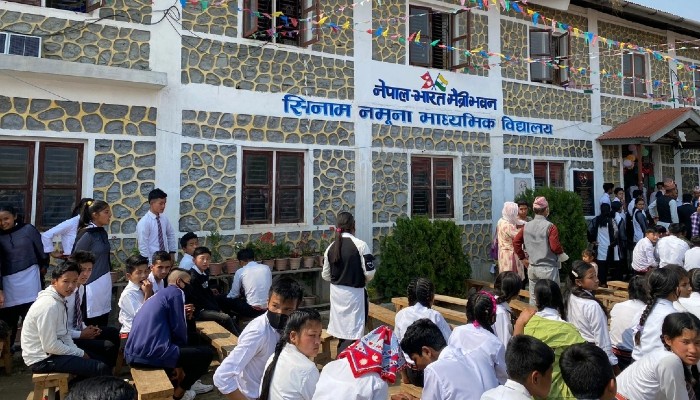 Recent initiatives and milestones in India’s development cooperation with Nepal are likely to be highlighted during the upcoming three-day visit of Nepal Prime Minister Sher Bahadur Deuba to India from April 1-3.

India’s development cooperation with Nepal is one of the fundamental pillars of the bilateral partnership.

It covers various areas such as road, rail, health, education, and power, which not only aim to improve infrastructure and cross-border connectivity between the two countries but also serve to make the ties even more people-centric as these projects touch the lives of the common men and women on both sides of the border.

India is the foremost development partner of Nepal. India-Nepal cooperation for developing modern infrastructure in Nepal began in 1951 with construction of Gauchar Airport (today known as the Tribhuvan Airport) in Kathmandu (completed in 1954).

The Indian Aid Mission in Nepal was set up in 1954 for coordinating various projects and efforts of Indian government for development in Nepal in the areas of connectivity, health, education, power, government departments etc.

The projects under the Development Partnership have been diverse in size and sector with geographical spread throughout Nepal. They include projects financed through grants as well as Lines of Credit provided by India.

Large and Intermediate Infrastructure Projects in priority sectors for Nepal such as Health, Education, Power, and Connectivity have been undertaken on grant basis in recent years.

Prominent examples of cooperation in Health Sector include the Nepal Bharat Maitri Emergency and Trauma Centre (INR 100 cr), Kathmandu. The country's first trauma centre with AIIMS like specialized facilities, this was inaugurated in November 2014. Another example is the new college block of B.P Koirala Institute of Health Science, Dharan (INR 125 cr) inaugurated in March 2014.

Cooperation in the education sector includes projects such as Nepal Bharat Maitri Vidalaya, Pokhara (INR 125 cr) that was opened in 2000 and Manmohan Memorial Polytechnic, Morang (INR 32 cr). This was the first polytechnic of its kind in Nepal providing technical education in three engineering streams as well as several vocational courses.

The project was inaugurated by the Prime Minister of Nepal in November 2009. A major project underway is the Construction of Nepal’s National Police Academy (NPA) at Kawrepalanchowk at an estimated cost of over INR 650 cr.

In the Power and Energy sector, India-Nepal cooperation had begun with Trishuli Hydropower Project (originally constructed in 1976 with an installed capacity of 21 MW with a grant of INR 140 million), it has grown since then.

A more recent milestone was the commissioning of Motihari-Amlekhgunj Petroleum Pipeline (INR 324 cr) in 2019. This is the first cross-border petroleum product pipeline in South Asia, which has resulted in direct economic benefits to Nepali people (decrease of NRs. 2/ litre in price).

Connectivity is an important aspect of the India-Nepal partnership.

Apart from the above projects, High Impact Community Development Projects (HICDPs) are another important portfolio of the India Nepal Development Partnership. HICDPs are short-gestation projects.

They have contributed to enhancing the quality of life and all round development of the people of Nepal.

Since 2003, over 523 HICDPs have been taken up by Government of India, of which 467 have been completed and remaining 56 projects are ongoing. The total cost of these projects is around INR 706 Cr (NRs 1130 Cr).

Projects under India’s Line of Credit

Besides, there also projects under Lines of Credit.

A total of USD 1.65 billion has been extended to Nepal under four separate Lines of Credit by GoI, which have been utilized to finance several projects in Nepal, mostly roads, transmission lines and reconstruction projects.

Another one is the Muzzafarpur-Dhalkebar Power Transmission line, that was launched by Prime Ministers of India and Nepal during the latter’s State Visit to India in February 2016. The Nepal portion of the 140 km long line was built under an Indian LoC (line of credit) of USD 13.5 million.

Among the prominent projects is also the Koshi Corridor transmission line, that is 106-km long and has costed a total of NRs 10.40 billion (USD 86.8 million) is being built under New Delhi’s LOC.

Once the remaining two packages are completed, the project will ensure smooth power evacuation from the generation projects coming up in the Arun and Tamor river basins, with power output totaling about 2000MW.

Package 1 of the 220kV Double Circuit Koshi Corridor power transmission line (Inarwa-Basantpr-Baneshwar-Tumlingtar) was handed over to Nepal Electricity Authority in October 2021.
India’s Line of Credit has also been extended to the Post-Earthquake Reconstruction.

Following the earthquake of April 2015, Government of India had committed USD 1 billion, comprising of USD 250 million as grant and USD 750 million as Line of Credit, for post-earthquake reconstruction projects in Nepal.

A major project recently completed under its ambit was the the reconstruction of 50,000 houses at a cost of USD 100 million in November 2021.