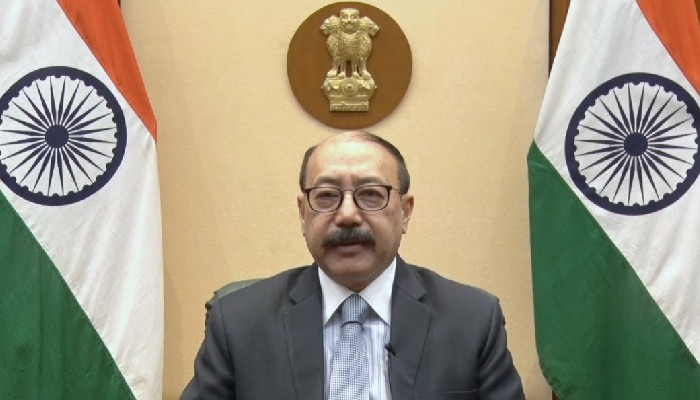 The true potential of the relationship could not be realised for long due to legacy issues and political equivocation on both sides, FS Shringla said

Foreign Secretary Harsh Vardhan Shringla on Wednesday said that India and UK see each other as strategic partners with equal stakes in global peace and security and in securing economic prosperity for its peoples.

In his keynote address at the First India-UK Strategic Futures Forum, Shringla said India and the UK are bound by common history, strong cultural links and shared values.

“As the oldest and largest functioning democracies in the world we are committed to upholding the values that define us as open and pluralistic societies, safeguard multilateralism and support a rules-based international order,” he stated.

“While we had the natural affinities for a promising partnership, its true potential could not be realised for long due to legacy issues and political equivocation, on both sides,” Shringla pointed out.

He noted that the global opportunities and challenges of the 21st century "have brought us closer together, made us recalibrate our relations and forge a modern partnership based on our complementary strengths and shared strategic priorities".

Noting that the leadership on both sides is heavily invested in the partnership, he said, both sides are keen to enhance cooperation across the full spectrum of relations including in trade and investment, science and innovation, migration and mobility, defence and security, health and climate change.

“It was for this reason that both leaders went ahead and held the Virtual Summit in May 2021 despite being in the midst of a severe second wave of the Covid pandemic and agreed to elevate bilateral relations to a Comprehensive Strategic Partnership,” Shringla stated.

Maintaining that the Roadmap 2030 launched at the Virtual Summit is a reflection of this ambition and details comprehensive plans for the relationship over the next ten years, he added that it also serves as a useful instrument to actively monitor and pursue agreed priorities.

Noting that the potential for a transformative change is most evident in the economic relationship, the Foreign Secretary said, India and the UK are the 5th and 6th largest economies in the world that enjoy huge complementarities and offer tremendous opportunities for growth on both sides.

“A major step in this direction was taken last year when both Prime Ministers launched the India-UK Enhanced Trade Partnership that aims to more than double bilateral trade by 2030,” he held.

“Bilateral trade negotiations that began early this year have been put on a fast track. Two rounds have already taken place with the last round in mid-March witnessing good progress,” Shringla informed.

“Both sides are committed to deliver a comprehensive and balanced FTA by the end of this year along with an interim deal for early gains. We are also building a strong financial partnership with closer cooperation in fintech, market regulation, and sustainable and green finance,” he suggested.

According to the Foreign Secretary, defence and security is another key element of our renewed partnership.

“The focus is on research and innovation and joint industrial cooperation to develop advanced defence capabilities and strengthen collaboration in tackling new threats in the cyber, space, counter-terrorism and maritime domains,” he said.

“We are keen to overcome legacy issues and engage in a robust dialogue to promote greater alignment on defence and strategic issues, including in the context of Indo-Pacific,” Shringla observed.

He said that India welcomes the UK’s Indo-Pacific strategy and its desire to deepen engagement in the region as reflected in the deployment of the Carrier Strike Group to the Indo-Pacific last year.

“This interest of the UK has the potential to contribute to regional stability and support shared prosperity. Our interests are also aligned in securing trusted and resilient supply chains for strategic technologies like 5G,” the Foreign Secretary reasoned.

He said that in today’s highly charged international security situation, India and the UK have worked closely in the UN Security Council to address global challenges that threaten international peace and security.

“We also work together on other areas of interest in the multilateral arena, including sustainable development, protecting the environment, blue economy and maritime security, health etc,” he stated.

“This mutual cooperation defines our modern partnership and has allowed India and the UK to take leadership in tackling global challenges in areas like climate change, clean energy and global health,” the Foreign Secretary remarked.
“As the world faced a pandemic of unprecedented proportions, India and the UK joined hands in bringing in game changing solutions,” he said.

“A notable success was the collaboration between Oxford Astra Zeneca and the Serum Institute of India,” Shringla said.

“As the world came together to take concerted climate action at Glasgow last year, India and the UK once again took the lead in launching the ambitious Global Green Grids - One Sun One World One Grid initiative that aims to tap the full potential of solar energy and accelerate global efforts towards clean and green transition,” he stated further.

“In the Commonwealth too, we are working closely together to preserve its core values and ensure that its agenda responds to the most urgent priorities of our times and delivers on the sustainable development needs of all its Member States,” he added.

“Last but not the least, we look to the ‘living bridge’ to anchor our co-operation in every sector,” Shringla stated.

“The 1.6 million strong Indian diaspora in the UK remains a key stakeholder in our ever-growing bilateral relationship and contributes to enhancing economic partnerships, scientific and technological collaborations and, more importantly, closer and stronger people-to-people links,” he said.

“India and the UK have embarked on a comprehensive Migration and Mobility partnership that will enhance two-way mobility of students, researchers and professionals and further reinforce these bridges in the coming years,” the Foreign Secretary stated further.