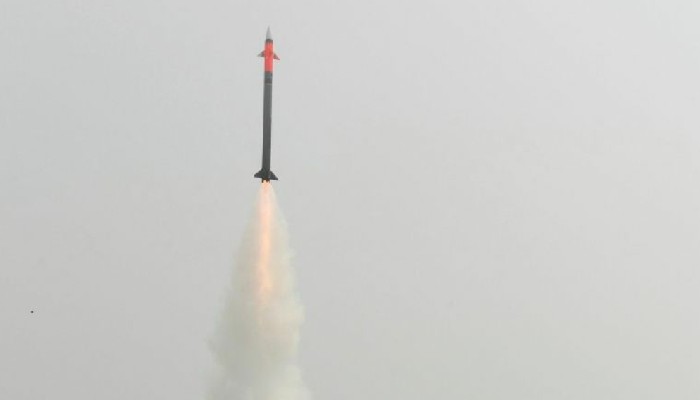 This MRSAM version is a Surface-to-Air Missile developed jointly by DRDO and Israel Aerospace Industries.

The MRSAM system has now completed its development trials

The MRSAMs were test-fired from the Integrated Test Range launch pad-III at Chandipur near Balasore before noon.

Both the flight tests achieved direct hits against high-speed aerial targets at Integrated Test Range, Chandipur off the coast of Odisha, added the Ministry.
With the conclusion of flight trials for different ranges and scenarios, the system has completed its development trials.

According to the Ministry of Defence, the first launch was to intercept a medium-altitude long-range target and the second launch was for proving the capability of a low altitude short-range target.

The launches were carried out establishing the accuracy and reliability of the weapon system against targets covering the sea skimming and high altitude functionality within the envelope.

"The performance of the weapon system was validated through the flight data captured by range instruments like radars, electro-optical tracking systems and telemetry deployed by ITR, Chandipur. The flight tests were carried out in the presence of senior officials from Defence Research and Development Organisation (DRDO) and the Indian Army” added the release from the defence ministry.

This MRSAM version is a Surface-to-Air Missile developed jointly by DRDO and Israel Aerospace Industries (IAI), Israel for use by the Indian Army. It was handed over to the Indian Air Force (IAF) in August 2019.

The missile is designed to provide the armed forces with air defence capability against a variety of aerial threats at medium ranges.

It may be noted that each MRSAM weapon system comprises one command and control system, one tracking radar, missiles, and mobile launcher systems. The weapon is 4.5m-long, weighs approximately 276kg, and is equipped with canards and fins for control and manoeuvrability.

Union Defence Minister Rajnath Singh congratulated the DRDO, Indian Army and industry for the successful flight tests of MRSAM-Army. He said, both the successful tests establish the capability of the weapon system in intercepting targets at critical ranges.

Secretary Department of Defence R&D and Chairman DRDO G Satheesh Reddy complimented the teams involved in the successful flight trial of the Army version of MRSAM and stated that these tests are the major milestones for an 'Aatmanirbhar Bharat'.