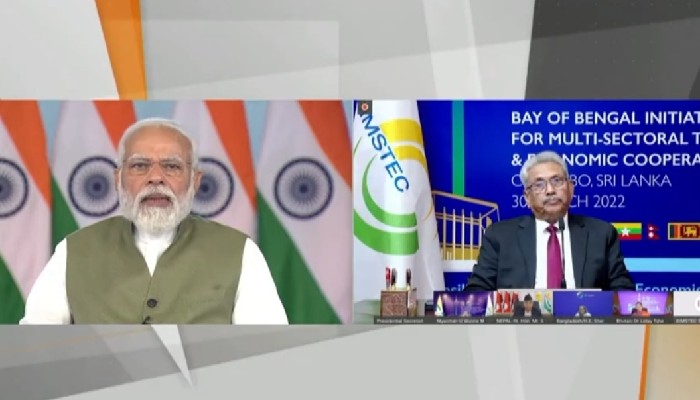 The 5th BIMSTEC (Bay of Bengal Initiative for Multi-Sectoral Technical and Economic Cooperation) Summit held on Wednesday saw the signing of the grouping's charter.

The Summit also adopted the Master Plan on Transport Connectivity.

In a special briefing after the Summit, Rudrenda Tandon, Additional Secretary (BIMSTEC) in the Ministry of External Affairs (MEA), said that signing of the BIMSTEC charter caps the process of formalizing this grouping into a proper regional organisation. "This was the main outcome of this Summit,” the MEA official mentioned.

With the Charter, BIMSTEC now has an international personality- it has an emblem, it has a flag, it has a formally listed purpose and principles that is going to adhere to and an architecture.

This process that was happening since 2004, but actually gained a lot of traction after 2014, Tandon added.

Also, in line with the development of the organisation into a formal structure, was the approval granted by leaders to a complete reorganisation of BIMSTEC cooperation activities, he said.

“Henceforth BIMSTEC cooperation activities will take place in seven pillars. Each pillar will be led by one of the member states, who will be primarily responsible for furthering cooperation,” the MEA official said.

“In that reorganisation it was decided that India will lead the security pillar,” he informed.

“The third major outcome of the summit from India’s perspective was the adoption of the Master Plan on Transport Connectivity,” MEA’s Additional Secretary (BIMSTEC) stated.

“This is a major agenda of BIMSTEC for several years, but at 2018 Summit in Kathmandu it was decided that we will approach this issue more systematically,” he said.

“It was a suggestion that came upon from Thailand to create a master plan that was worked upon for the past two years in collaboration with the Asian Development Bank (ADB) and was finalized in time for this Summit,” Tandon said.

The BIMSTEC leaders adopted the Master Plan as a framework or guidance for the type of cooperation that we are likely to do in the future in the connectivity space, he explained.

In addition to these three major outcomes where the leaders were involved directly, it witnessed the signing of three agreements, Tandon said.

These are, BIMSTEC Convention on Mutual Legal Assistance in Criminal Matters; BIMSTEC Memorandum of Understanding on Mutual Cooperation in the field of Diplomatic Training and Memorandum of Association on Establishment of BIMSTEC Technology Transfer Facility.

“This represents incremental progress that is being achieved on this platform’s ongoing areas of cooperation,” the MEA official said.

PM Modi also made announcements of some Indian intiatives which will further the BIMSTEC Agenda in a more accelerated manner, he added.

“In this regard he announced USD 1 million as an ad-hoc grant for the operational budget of the grouping's secretariat. The objective of that was to ensure that pending institutional building tasks are taken forward in a rapid pace,” Tandon said.

PM Modi also announced the USD 3 million grant to revive the BIMSTEC Centre for Weather and Climate which is an important part of the Disaster Management Risk Reduction Agenda, he maintained.

Meanwhile, with the aim of furthering BIMSTEC’s economic integration agenda, the Indian Prime Minister announced the establishment of the programme run by ICRIER in India and the aim of this will be to adopt as many international standards and norms for trade facilitation, the MEA official further said.

“All in all, It was a satisfying or productive summit from our perspective because the BIMSTEC agenda was taken forward, we were able to announce initiatives that will accelerate the process,” he explained.

“Our overall takeaway from the summit was that at the political level, there is great political will to move the BIMSTEC agenda forward and there is also a sentiment that this moving forward has also to be done with urgency given the type of challenges that member-states are facing,” Tandon mentioned further.

Noting that the Summit’s theme ‘Towards a Resilient Region, Prosperous Economies, Healthy People’ was chosen by the Chair, who has the prerogative to do so, Tandon said that the theme sought to capture the main preoccupations that currently prevail in the top political leadership in the region centred around prosperity, resilience and public health.

“This provided the context to several of the interventions that we saw including that of PM Modi,” he said.

Prior to this summit, there were preparatory meetings at the Foreign Minister’s level and the senior officials level which took place on Monday and Tuesday. MEA’s Secretary (East) Saurabh Kumar and External Affairs Minister, S Jaishankar attended these meetings in Colombo.