India-UAE CEPA to come into force from May 1: Piyush Goyal 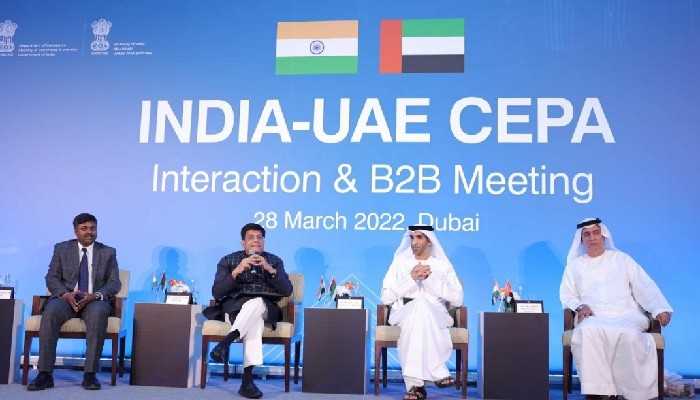 The free trade agreement signed between India and the United Arab Emirates (UAE) will come into effect from May 1 this year, Union Minister for Commerce & Industry Piyush Goyal confirmed in Dubai on Monday.

Under this, domestic exporters of as many as 6,090 goods from sectors like textiles, agriculture, dry fruits, gem and jewellery would get duty-free access to the UAE market, Goyal added.

The Comprehensive Economic Partnership Agreement (CEPA) was signed by India and the UAE in February this year. It aims to boost bilateral trade to $100 billion in the next five years from current $60 billion.

Goyal added that the detailed text of the pact has been released in public domain and now the Ministry is trying to complete all its paperwork, all the customs notifications expeditiously.

Addressing a Business-to-Business (B2B) Meet on the India-UAE CEPA, Goyal said the historic deal sets the tone for new beginnings, extraordinary outcomes & a paradigm shift in trade ties between the two countries.

Explaining the importance of the pact, he said the UAE also opened doors for the rest of the Middle East, some parts of Africa and Europe. Key areas of India's interest are computer related services, audio visual, education, health, tourism, travel, professional services like nursing, engineering, and accountancy.

“This significantly opens the doors to significant markets all over the world. So when we set out to engage with each other, we were not engaging with a 10 million population in the UAE, I had in mind, and both of us had in our vision, the much larger engagement that this CEPA is going to offer to businesses on both sides”, said Goyal.

Goyal said the India-UAE CEPA, covering Merchandise Trade and Services, has many first to its credit, including the fact that the trade pact was sealed in a record short time span of 88 days.

Immediate duty-free access covers all labour-intensive sectors such as gems and jewellery, textiles and apparel, agricultural and fish products, leather, footwear, and sport goods, Pharmaceuticals and Medical devices, and many engineering products.

Goyal termed the India-UAE Partnership as the “defining strategic partnership of the 21st century”. This Agreement gives a new direction, a paradigm shift to this relationship, he said.