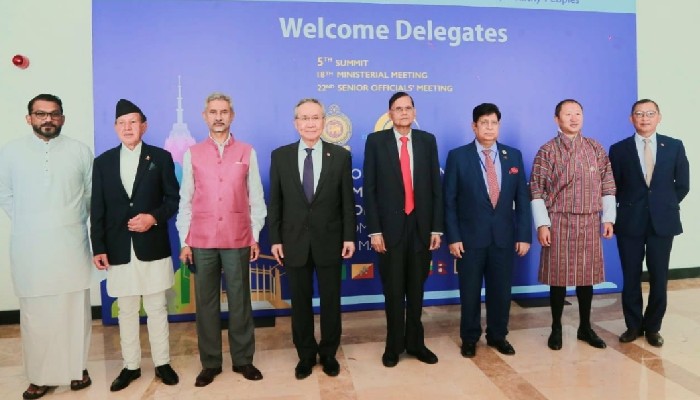 EAM S Jaishankar with ministers of other BIMSTEC nations.

The meetings took place on the sidelines of the 18th Bay of Bengal Initiative for Multi-Sectoral Technical and Economic Cooperation (BIMSTEC) Ministerial Meeting in Colombo, Sri Lanka.

In a tweet the External Affairs Minister said that during his meeting with Nepali FM Narayan Khadka, he discussed cooperation in connectivity, energy, fertilizers, health and power sectors.

“Good to meet FM Narayan Khadka of Nepal on the sidelines of the BIMSTEC Ministerial. Discussed our cooperation in connectivity, energy, fertilizers, health and power. Agreed to focus on taking forward the Ramayan circuit,” his tweet said.

In a tweet, Nepal's Foreign Ministry tweeted thatthe ongoing preparations for Prime Sher Bahadur Deuba's visit to India were among the matters discussed in the meeting.

Jaishankar also tweeted that he met with Bhutan’s Foreign Minister Tandi Dorji and discussed the longstanding India-Bhutan cooperation in the hydropower sector and reviewed various other projects and initiatives.

“Pleasure as always to see Foreign Minister of Bhutan. Discussed our long standing cooperation in the hydropower sector. Reviewed various other projects and initiatives. Spoke about the Bhutanese talent I saw recently in our training institutions. Look forward to continuing our engagement,” he tweeted.

Meanwhile, Minister Jaishankar tweeting about his meeting with Bangladesh Foreign Minister AK Abdul Momen said that he invited the latter to visit India at an early date.

“Nice to catch up with FM A.K.Abdul Momen of Bangladesh. Invited him to visit India at an early date.”

On Monday, EAM Jaishankar had met the Deputy Prime Minister and Foreign Of Thailand Don Pramudwinai of Thailand.

"Discussed global and regional issues as well as taking BIMSTEC forward," he said in a tweet.