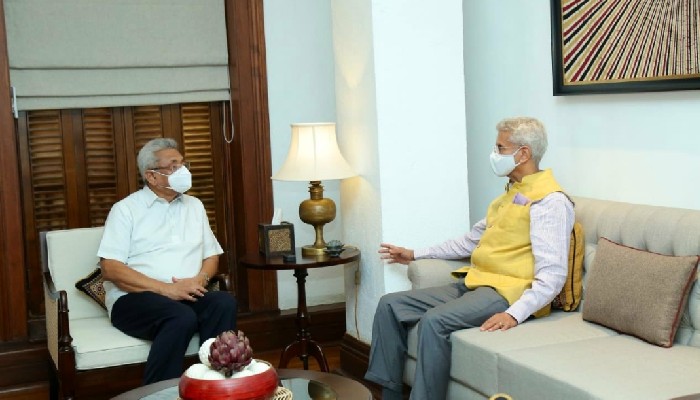 EAM Jaishankar is on a three-day visit to Colombo at the invitation of Sri Lankan Foreign Minister G L Peiris.

Jaishankar narrated his various engagements during the day through a series of tweets.

“Pleased to call on President @GotabayaR of Sri Lanka. Reviewed various dimensions of our close neighbourly relationship. Assured him of India’s continued cooperation and understanding,” his tweet said.

“Thank Prime Minister @PresRajapaksa for his gracious welcome. Our discussions were followed by some notable events: 1. Witnessed the signing of agreement on supporting Buddhist culture and heritage. 2. Virtually toured an ongoing camp in Jaffna on fitting ‘Jaipur Foot’,” he said.

“3. Virtually inaugurated the Jaffna Cultural Centre constructed by India,” the Minister added in the tweet.

Earlier in the day, Jaishankar also had a meeting with Finance Minister Basil Rajapaksa.

“Began the visit by meeting Finance Minister @RealBRajapaksa. Discussed the economic situation and India’s supportive response. We will continue to be guided by Neighbourhood First,” he said.

“Great example of shared talent and global workplace. Appreciate @RajapaksaNamal for joining on this occasion,” he mentioned in his tweet.

“Indian LoC of US$ 500 million is helping Sri Lankan people in their everyday life,” his tweet said.

EAM Jaishankar's trip to Sri Lanka follows the visits to India by the Sri Lankan Finance Minister in December 2021 and earlier this month.

The bilateral meetings and interactions which EAM Jaishankar will have in Sri Lanka highlight the priority that the island country occupies for India, the MEA had maintained in a statement last week.

While in Sri Lanka, EAM Jaishankar will also participate in the BIMSTEC Ministerial Meeting on Tuesday.