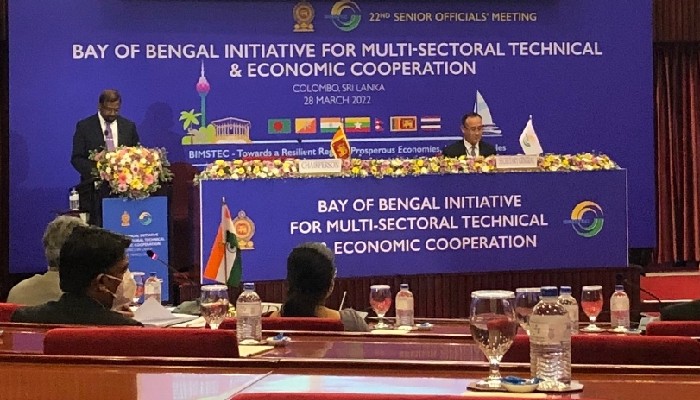 The BIMSTEC Senior Officials' Meeting being held in Colombo, Sri Lanka on Monday.

The Summit will be hosted by current BIMSTEC chair Sri Lanka

Leaders of the seven nations that comprise the Bay of Bengal Initiative for Multi-Sectoral Technical and Economic Cooperation (BIMSTEC) will attend the 5th Summit on Wednesday through the virtual mode.

BIMSTEC as a multi-sectoral grouping serves as a link between South and South East Asia. Its members are Bangladesh, Bhutan, India, Myanmar, Nepal, Sri Lanka and Thailand.

Expectations from the Summit

The 5th Summit to be held on Wednesday will be hosted by current BIMSTEC chair Sri Lanka. Ahead of the Summit, preparations are being made through meetings of BIMSTEC Senior Officials (SOM) on Monday and will be followed by meetings of the BIMSTEC Foreign Ministers (BMM) on Tuesday.

A Ministry of External Affairs statement announcing the 5th BIMSTEC Summit had noted last Saturday, “the Covid pandemic related challenges, and the uncertainties within the international system that all BIMSTEC members are facing, imparts greater urgency to the goal of taking BIMSTEC technical and economic cooperation to the next level.”

Deliberations on the BIMSTEC Charter, institutional structures and mechanisms, finalizing a Master Plan for transport connectivity and rationalizing its sectors of cooperation for better functionality are expected to be on the agenda.

The 4th Summit was held in Kathmandu in 2018 when a decision was taken to prepare a draft charter for BIMSTEC. The charter that defines the goals, institutions and long-term vision of the grouping is likely to be adopted during the summit on Wednesday.

Also in the summit, deliberations on the establishment of basic institutional structures and mechanisms are expected, thereby lend more vitality and purpose for the grouping.

In December 2020, a BIMSTEC working group meeting had finalized the BIMSTEC Master Plan for transport connectivity that is developed in collaboration with the ADB and is likely to be adopted.

This plan is envisioned to serve as a strategic document to promote synergy under various connectivity frameworks such as the ASEAN Master Plan on Connectivity 2020-25.

At the Summit, BIMSTEC leaders may also approve a major rationalisation of sectors of cooperation, bringing them down from 14 to seven areas with each member state having the responsibility of leading a sector.

The 5th Summit is also taking place at a delicate time as the Bay of Bengal littorals are already witnessing another wave of COVID pandemic with economies backsliding due to frequent lockdowns. The ongoing pandemic has constrained regional organisations and their functioning.

At a time when, international organisations like the United Nations (UN) are faced with a growing trust deficit, BIMSTEC and its member nations have to strive hard in remaining relevant. Besides, the ongoing war in Ukraine has also led to a global churning, requiring nations to seek regional solutions to problems.

The 5th BIMSTEC Summit also comes after strategic fault-lines of China’s aggressive and violent posturing in the region were exposed, especially after the June 2020 Galwan Valley clash, necessitating a resilient joint front of Bay of Bengal littorals to ward off China’s predatory strategic design.

Though BIMSTEC’s original mandate is to address non-traditional security threats like Counter Terrorism and Transnational Crime (CTTC), Disaster Management and Energy, the defence forces of the littoral nations have intensified their defence cooperation activities including joint exercises by its armed forces.

In this context, it may also be recalled that it was following the Pathankot attack of 2016, that India had taken the initiative in reviving the grouping after decades of inertia by convening the BRICS-BIMSTEC Outreach Summit in Goa, in October of the same year.

Increasingly since then, BIMSTEC is viewed in Indian strategic circles as an alternative to the South Asian Association for Regional Cooperation (SAARC), and with its obvious exception of Pakistan.

This time around, Beijing's flexing of muscles in the Bay of Bengal which New Delhi considers its own sphere of influence seems to be the larger concern for India.

It is also worth noting that several countries including Sri Lanka are under huge debt from Beijing. According to Central Bank of Sri Lanka, Colombo owed Beijing $3.5 billion by the end of 2020, excluding loans to state-owned firms.

Now in the 25th year of its formation, BIMSTEC as a regional grouping presents an immense potential with the nations Bangladesh, Bhutan, India, Myanmar, Nepal, Sri Lanka and Thailand, bringing together 1.67 billion people and a combined GDP of around US $ 2.88 trillion.

The convening of the BIMSTEC Summit which was long due is timely and the most opportune moment for BIMSTEC nations to take their multi-sectoral cooperation to the next level.