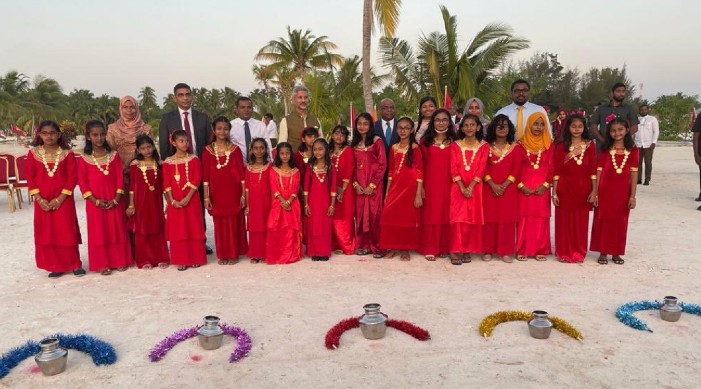 The Meedhoo eco-tourism zone was one of the projects inaugurated by EAM Jaishankar.

External Affairs Minister S Jaishankar, who was on a two-day visit to Maldives, inaugurated numerous projects built with Indian grant assistance on Sunday.

Jaishankar announced the inauguration of the projects in a series of tweets.

In one of the tweets, he thanked Maldivian Foreign Minister Abdulla Shahid and Mayor Ali Nazir from Addu city for joining him at the Meedhoo eco-tourism zone inauguration.

He hailed the inauguration of the eco-tourism zone as practical example of working together on promoting tourism and reviving the economy.

In an earlier tweet, he expressed happiness in participating along-with FM Shahid and Health Minister, Kerafa Naseem at the inauguration of the Drug Detoxification and Rehabilitation Centre in Addu.

“The first among 20 Indian community development projects in Maldives, it is testimony to the deep people to people connect and shared social commitment of our two Governments,” his tweet added.

On Sunday, Jaishankar also handed over the expanded Coastal Radar System in Maldives to Chief of Defence Force.

He hailed it as a product of MEA-Navy partnership for regional security and a fine example of our SAGAR and Neighbourhood First policies.
“A strong statement of our Special Partnership,” the Minister said in his tweet.

He also attended the ground breaking of a road project in Addu.

“Breaking new ground in #IndiaMaldives friendship. The road project in Addu goes forward,” he said in the tweet.

Earlier in the day, the External Affairs Minister of India joined Maldivian President Ibrahim Solih at the inauguration of National College for Policing & Law Enforcement (NCPLE) at Addu.

“One India’s largest grant funded project in the Maldives, it will be the hub for a modern Police force in the years to come. NCPLE will serve to strengthen the traditions of exchanges and training between the Police forces of Maldives and India,” Jaishankar’s tweet informed.

"A fruitful meeting with @shimranAb, Home Minister of Maldives.

On Saturday, the two sides had signed a Memorandum of Understanding (MoU) on reciprocal recognition of Covid vaccination certificate which will facilitate easier travel between Maldives and India.

They had also signed a Peering Agreement for connectivity between the Higher Education Network of Maldives and the National Knowledge Network of India.