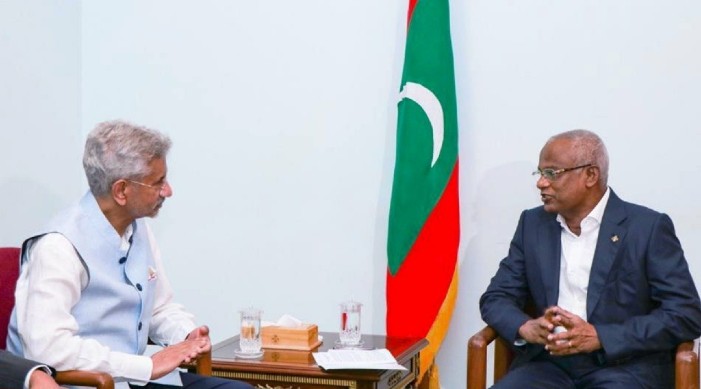 External Affairs Minister S Jaishankar on Sunday said that Maldives' policy of ‘India First’ and India’s policy of ‘Neighbourhood First’ are not just phrases but are actually the very fulcrum of the relationship between the two countries.

Jaishankar made the remarks while inaugurating the National College for Policing and Law Enforcement (NCPLE) in Maldives’ Addu City, one of India’s largest grant funded projects in the island nation, in the presence of Maldivian President Ibrahim Mohamed Solih.

“We are proud of what we have achieved in recent years, we are particularly proud of the way we have faced challenges together. And it has showed that your policy of ‘India First’ and our policy of ‘Neighbourhood First’, these are not just phrases but these are actually the very fulcrum of our relationship,” he stated

“This morning, I also had an opportunity to pay homage at the Addu War Memorial, where Indian soldiers and servicemen died between 1942 and 1944. And their passing away reminds us how history - in many ways - connects India and the Maldives,” the Minister informed.

He said that in recent times, under the leadership and guidance of Prime Minister Modi and President Solih, the India-Maldives partnership has achieved momentum and indeed dynamism on an unprecedented scale.

“Today, our partnership envelopes cooperation in almost every facet of our bilateral relationship. The focus of our engagements, of course, always remains the well-being of our peoples,” Jaishankar noted.

Referring to the National College for Policing and Law Enforcement (NCPLE) as an apex grant project for the Government of India, he said prior to the Greater Male Connectivity Project, in fact it is our largest grant funded project.

“This sprawling campus is a monument to our growing cooperation. I congratulate the Government of Maldives on this achievement,” the External Affairs Minister mentioned.

“We hope that the NCPLE will soon grow into an iconic institution that churns out the best brains and bodies to face the challenges that confront any modern police force,” he remarked.

“The MoU that will be signed here today – between the Sardar Vallabhbhai Patel National Police Academy (SVPNPA) of India and the Maldives Police Service - will be a springboard for the NCPLE to grow its capacities through training and the development of its curriculum,” Jaishankar said.

“Aware of the importance of this training for the MPS, we have increased the number of training slots for the Maldives at our police academy to 8,” he announced.

“We hope that the fraternal bonds, which he himself has personally developed over many years, between our two institutions will empower NCPLE to become a regional centre of excellence on law enforcement in the coming years,” the Minister added.

Informing that the project for creation of police infrastructure facilities across the islands of Maldives with over USD 40 million financing from EXIM Bank of India has received the necessary approvals, he said, under this project, 61 facilities including island and atoll-level police stations, divisional headquarters, detention centres and barracks will see construction begin soon.

Noting that India and Maldives share a deep and abiding friendship, Jaishankar said that today, our relationship is so full of promises and possibilities for our youth and for our future generations.

“It is also a partnership of great consequence and a real force of stability and prosperity for the Indian Ocean Region,” he further said.

“I am confident that NCPLE will be one such flagship institution which would radiate this message. I congratulate President Ibrahim Mohamed Solih, the Government and People of Maldives, and in particular, the officers of the Maldives Police Services on its inauguration,” the Minister added.

EAM Jaishankar had called on President Solih earlier in day.

"An honour to be received by President @ibusolih of Maldives. Conveyed the personal greetings and good wishes of PM @narendramodi.

Disussed the special partnership between our two countries that has produced so many substantive outcomes during his tenure," he said on Twitter.