India-Maldives partnership a force for stability in the region: EAM Jaishankar 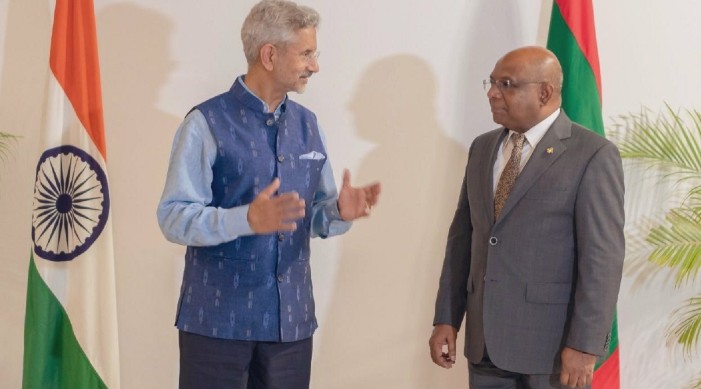 The time-tested relationship between the two countries is poised for a quantum jump, he said

India’s partnership with Maldives is a force for stability in the region, External Affairs Minister S Jaishankar said during his visit to Maldives on Saturday.

It is the shared responsibility of both nations to nurture, strengthen it and take it forward, he said in his remarks at the Joint Press Conference with Foreign Minister of Maldives Abdullah Shahid in Addu.

He emphasised that the time-tested relationship between the two countries is today poised for a quantum jump.

“I return to the Maldives after more than a year and the time in between, actually despite the Covid, has witnessed fast paced progress in our relationship. Guided by the leadership of Prime Minister Narendra Modi and President Ibrahim Mohamed Solih, our cooperation has actually witnessed and withstood the arc and anguish of the pandemic together,” EAM Jaishankar said.

Congratulating Maldivian President Solih, Foreign Minister Abdullah Shahid and the Government and people of the Maldives for dealing with adversity of Covid in a very successful and effective manner, Jaishankar said, "you have vaccinated your population, and your economy has shown resilience and recovery".

“Our cooperation during the pandemic has displayed solidarity, solidarity in terms of the design, the speed, and the scale of our response. And when I hear of your model of dealing with Covid, quite honestly, we share your satisfaction,” he said.

He termed Saturday's agreement on the mutual recognition of COVID-19 certificates as a step forward in the same direction, adding that it would certainly contribute to easier travel between the two countries.

Calling the development partnership between the two countries as a central pillar of our relationship, he added, it is a very transparent partnership, driven directly by Maldivian needs and priorities – today ranges upwards of USD 2.6 billion in terms of grants, concessional loans, budgetary support and capacity building and training assistance.

Noting that he and his Maldivian counterpart held wide-ranging discussions on the bilateral partnership, Jaishankar said, "we took stock of ongoing projects and initiatives across a very wide range of sectors andlooked at socio-economic development, trade and investment, and, tourism".

With regard to Addu, India is supporting projects in a range of sectors - infrastructure, tourism, fish processing and health, he informed.

“Work has commenced on Addu Roads projects, as also on the 4000 housing units, the drinking water and sanitation,” the EAM added.

Referring to the iconic Greater Male Connectivity Project as holding potential of actually transforming the transport landscape of the capital, he said, we have moved from the level of concept to preliminary works in less than two years, that too during the years of Covid.

The Minister noted that the Hanimaadhoo Airport Redevelopment Project, the expansion of facilities of MIFCO, the cricket stadium and the social housing projects have all seen momentum in implementation in the past year.

He expressed pleasure to hear that the DPR of USD 40 million Sports Line of Credit announced when he was in Maldives in February last year is near completion. “Under this LOC, the National Stadium will be renovated and sports infrastructure would be built across Maldives,” Jaishankar explained.

Acknowledging the strides made in the fields of capacity building and training, he expressed pleasure in joining FM Shahid in the inauguration of the National Knowledge Network (NKN).

“With the signing of the Peering Agreement today, over 1500 Indian institutes and a host of universities and centres of learning from Singapore, Europe and the United Stated are now connected to the Maldives,” the EAM further said.

“We are pleased with the steady growth of our tourism and I think we are among the top sources of tourists in 2020 and 2021,” he further stated.

Assuring that the two countries will make all the efforts and give all the encouragement to keep that position in the coming year, he recounted that they are glad that at a time of global uncertainty and volatility, they have been able to consistently keep up supplies of essential commodities to Maldives.

Commending both the governments and the people of Maldives for their efforts and ambition in the area of climate change, Jaishankar said that India stands ready to share its capabilities with Maldives in this regards.

“We are already engaged in the development of water and sanitation facilities on 34 islands through LoC financing. Apart from extending basic civic amenities to island communities, the project that is one of the largest climate adaptation measures ongoing in the Maldives at a cost of more than USD 100 million,” he said.

Stating that the two ministers had a discussion on regional security and maritime safety issues, EAM Jaishankar said that the threat of transnational crimes and terrorism and drug trafficking is indeed very serious.

“In this context, I’m very pleased to see that our capacity building and cooperation and training have expanded in this. I think it is for both of us, strengthens our defence and security,” he added.

According to the Minister, the National College of Policing and Law Enforcement (NCPLE), that will be inaugurated tomorrow deserves some special words.

“It is our largest grant funded project in Maldives, and prior to the Greater Male Connectivity Project. It will assist the Maldives Police Service (MPS) to train its officers and enhance its crime-fighting capacities for the years to come,” he said.

“We are also signing a MoU for capacity building between the Maldives Police and our National Police Academy. Tomorrow, we will also be handing over formally, the Coastal Radar System which is already operational and will help in enhancing maritime security," Jaishankar further informed.

“Let me in conclusion emphasise that our time-tested relationship is today poised for a quantum jump. We are touching the lives of our people like we have done never before,” he said.

“We are partners in development, we are promoting peace and security, and our relationship, in many ways, serves as a model for the region,” the External Affairs Minister said.

"I would like to take this opportunity to assure you that we remain very strongly committed to further progress of this relationship and coming to Addu has been a particularly effective way of messaging that," EAM Jaishankar said.

Meanwhile, in a tweet, Foreign Minister Shahid noted that EAM Jaishankar had "made history", pointing out that this was the first time that official talks has been held outside of the capital city Male.