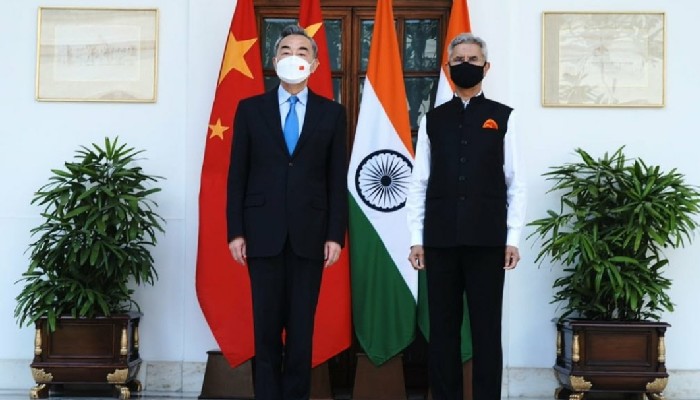 India wants a stable and predictable relationship with China but restoration of normalcy will require a restoration of peace and tranquility at the borders, External Affairs Minister S Jaishankar said after meeting his Chinese counterpart Wang Yi in New Delhi on Friday.

The frictions and tensions that arise from China's deployments since April 2020 cannot be reconciled with a normal relationship between two neighbours, he pointed out during a special briefing after meeting the Chinese Foreign Minister.

The meeting which lasted nearly three hours discussed the bilateral relations that have been disturbed as a result of Chinese actions since April 2020.

"So long as there are very large deployments in the border areas which are violative of the 1993 and 1996 agreements, clearly the border area situation is not normal," Jaishankar pointed out.

"I was very honest in my discussions with the Chinese Foreign Minister, especially in conveying our national sentiments on this issue," Jaishankar said.

According to EAM Jaishankar, Wang Yi spoke about China's desire for a return to normalcy while also referring to the larger significance of their ties.

The Indian Foreign Minister recalled that the two had been in touch over the last two years even though they not visited each other's countries. They met in Moscow in September 2020 and in Dushanbe in July and September 2021.

"The focus of these interactions has naturally been on the situation in our border areas," he said.

Their meeting had led to an understanding in disengagement and de-escalation. "The challenge, of course, had been implementing it on the ground," he pointed out.

There have been15 rounds of Commander- level talks on the border situation and progress has been achieved on sever friction points from the disengagement perspective.

"This needs to be taken forward since the process of disengagement is necessary for discussions on de-escalation," he added.

"I would describe the current situation as work in progress, obviously at a slower pace than desirable," he said.

Responding to a question, Jaishankar said, "We still have friction areas. We have made a lot of progress in some other friction areas and Pangong Tso is notable in that regard". Friday's discussion was on how to take this forward, he added.

EAM Jaishankar welcomed the progress made at the Commander level talks and the WMCC meetings. "But they haven't sorted out the issue in entirety," he pointed out in response to another question at the special briefing.

"Our effort today is to sort out things in entirety and deal with disengagement. It then allows us to look at the de-escalation possibilities," he said.