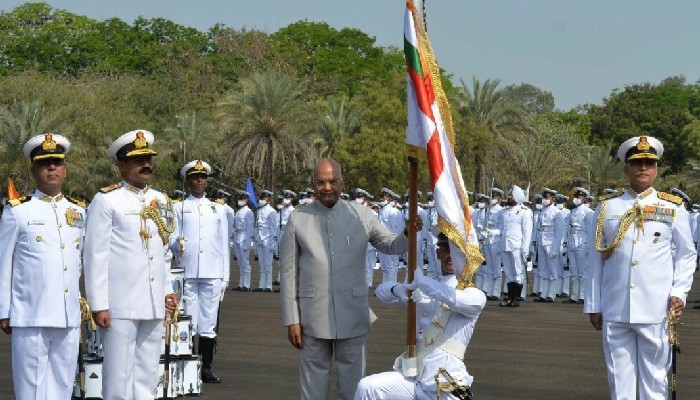 Over the years, the Indian Navy over the years has emerged as a combat ready, credible and cohesive force, President Ram Nath Kovind said on Friday.

It is the ‘Preferred Security Partner’ in the Indian Ocean Region, said President Kovind on the occasion of presentation of President’s Colour to INS Valsuraat Jamnagar, Gujarat.

The award was conferred to INS Valsura, a premier naval training establishment, for its 80 years of exceptional service, both in peace & in war.

To mark the occasion, a ceremonial parade was held and a 150-men guard of honour was presented to the President.

“The Indian Navy is safeguarding our national interests in the maritime domain. It is a matter of great pride that it has consistently evolved to safeguard our extensive maritime interests with resolve and tenacity,” President Kovind said.

The President also noted that the Indian Navy is continuously enhancing its strength keeping in mind the long-term perspective plans and towards meeting the expanding range of missions.

He expressed confidence that INS Valsura would continue to equip the officers and sailors with the requisite skill-set to ensure combat worthiness of complex weaponry, electronics, and IT equipment fitted onboard ships and submarines.

Established in 1942 in Jamnagar, Gujarat, INS Valsura is a premier training establishment of the Indian Navy and is responsible for imparting training to officers and sailors of the Indian Navy, Coast Guard and friendly foreign countries in electrical, electronics, weapon systems and information technology.

The institute aims to augment training facilities in the domain of Torpedo handling (Underwater missile) and operations and has distinguished itself with notable and gallant service to the nation over nearly 80 years.

The establishment has over the decades faced several hurdles, from a devastating cyclone that lashed the coast of Gujarat to the deadly earthquake that shook the whole of Gujarat, and every time it has bounced back and contributed to nation-building.

Pointing to the fact that INS Valsura was commissioned as a Torpedo Training School during World War II to enhance capability of the Royal Indian Navy, the President said that over the last 79 years, it has transformed into a premier technical training institution.

The establishment, which began on a modest note on just 30 acres of land as a Torpedo School in 1942, now houses the sprawling 600 acres campus, which is one of the foremost technological training institutions of the country.

The President was happy to note that INS Valusra has also initiated a number of social outreach programmes and welfare measures in the Saurashtra region.