India abstains from UNGA resolution on humanitarian situation in Ukraine 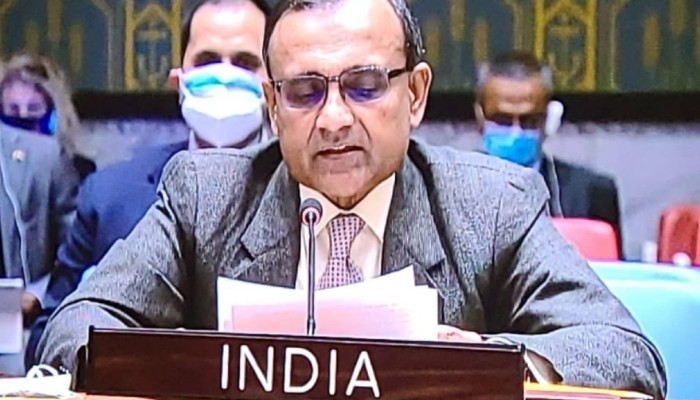 India has reiterated its call for an immediate ceasefire in Ukraine

India on Thursday abstained from voting on the draft resolution in the UN General Assembly (UNGA) by Ukraine and its allies on the humanitarian crisis in the war-torn country.

India pointed out that the draft resolution didn’t fully reflect India’s expected focus and the need of hour was to focus on cessation of hostilities.

A statement by India's Permanent Representative to the United Nations TS Tirumurti on the ‘Explanation of Vote-UNGA resolution on Ukraine’ said India continues to remain deeply concerned at the ongoing situation, which has rapidly been deteriorating since the beginning of the hostilities.

The UNGA adopted Thursday’s resolution on the humanitarian situation in Ukraine, with 140 countries voting in favour and 5 against it. A total of 38 countries including India abstained. Meanwhile, Russia, Belarus, Eritrea, North Korea and Syria voted against it.

Arguing that the conflict has resulted in death of civilians and nearly 10 million people have either been displaced internally or moved to neighboring countries, the Indian envoy to UN said, "we have constantly called for cessation of hostilities".

Noting that the humanitarian situation continues to worsen, particularly in the conflict zones in urban centres, Tirumurti said, women, children and elderly are disproportionately affected by the prolonging of the conflict.

“We reiterate our call for immediate ceasefire,” he noted.

“There is an urgent need to address the humanitarian needs of the affected population. In this regard, we support the initiatives of UN, and its agencies,” India’s Permanent Representative to UN noted.

“We hope the international community will continue to respond positively to the humanitarian needs of the people of Ukraine, including through extending generous support to the Secretary General’s Flash Appeal and the Regional Refugee Response Plan on Ukraine,” he added.

According to Ambassador Tirumurti, India has already sent over 90 tonnes of humanitarian supplies to Ukraine and its neighbours, as part of nine separate tranches of humanitarian assistance delivered thus far.

“These supplies have included medicines and other essential relief material. We are in the process of sending further supplies in the coming days,” he told UNGA.

Mentioning that India has ensured the safe return of about 22,500 Indians from Ukraine, Indian envoy to UN said, to that end, India initiated Operation Ganga involving 90 flights and also assisted nationals from 18 other countries in that process.

“We are deeply appreciative of the facilitation rendered by the authorities of Ukraine and its neighbouring countries in ensuring their safe return,” he said.

“Allow me to underscore that it is important that humanitarian action is always guided by the principles of humanitarian assistance, i.e., humanity, neutrality, impartiality and independence. These measures should not be politicized,” Tirumurti warned.

He said that India firmly believe efforts at the United Nations should contribute to de-escalation of the conflict; facilitate immediate cessation of hostilities to promote dialogue and diplomacy and bring parties together to find an immediate end to the suffering of the people.

“We continue to underline the need to respect the UN Charter, international law and the sovereignty and territorial integrity of states,” Ambassador Tirumurti further said.

“India abstained on the resolution since what we require now is to focus on cessation of hostilities and on urgent humanitarian assistance. The draft resolution did not fully reflect our expected focus on these challenges,” he explained.