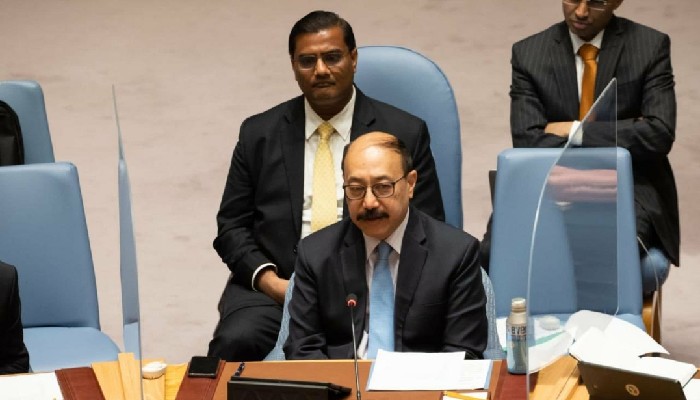 The League of Arab States has contributed positively to security and stability in the region, he said

India at the United Nations Security Council (UNSC) on Wednesday expressed its steadfast support for a closer, meaningful and sustained cooperation between the UN and the League of Arab States for the benefit of the region.

Foreign Secretary Harsh Vardhan Shringla in his address at the UNSC briefing on ‘Cooperation between the UN & Regional & Subregional Organisations (League of Arab States)’ said India will continue to partner with the Arab countries in their efforts to achieve regional peace, stability and prosperity.

India will continue to work with the League of Arab States in combating terrorism and in promoting tolerance and pluralism, he added.

He expressed India’s steadfast support for a closer, meaningful and sustained cooperation between the United Nations and the League of Arab States for the benefit of the region.

“For over a millennia, the Arab world has been a cradle of human civilization. Given its strategic location, developments in the Arab world have influenced our shared history and they continue to have a profound impact globally,” Shringla stated.

“The challenges confronted by the region today and how we address them will have a critical bearing on international peace and security,” the Foreign Secretary added.

“India and the Arab world share a civilizational relationship, underpinned by our strong people-to-people relations and commercial and cultural ties,” he said.

“Trade between India and the Arab region through the Indian Ocean had flourished for several centuries even before the advent of modern commerce. The Indian rupee was legal tender in parts of the Arab world not very long ago,” Shringla stated.

“Today, countries from the Arab world are host to more than 9 million Indians and India’s wide-ranging partnership with these countries encompasses every aspect of human endeavour – from agriculture, trade, commerce and education to clean energy, counter-terrorism and new technologies,” he informed.

According to the Foreign Secretary, India and the League of Arab States signed an MOU two decades ago for institutionalizing a regular dialogue process to forge a partnership for the future.

“It led to creation of the India - League of Arab States Forum, during which progressive co-operation in several fields like energy, environmental protection, investment, food security, science and technology and human resource development were agreed upon,” he said.

“Several other initiatives to deepen our engagement with the League of Arab States have also been conceptualized including the Energy Symposium, Media Symposium and the first edition of the Arab India Energy Forum which was successfully convened a few months ago,” the Foreign Secretary informed.

Noting that the League of Arab States has contributed positively to security and stability in the region, he added, its Member States are significant troop and police contributors to UN peacekeeping forces.

“The Arab States are among the largest donors of humanitarian assistance to countries facing armed conflict in the region,” Shringla further mentioned. “The League has played an important role in the areas of mediation, conflict prevention and resolution in the region,” he further stated.

The Foreign Secretary underlined that the League of Arab States can further contribute in our joint endeavour for peace, for the sake of the people of the region, in general and women and minorities, in particular.

He submitted four proposals; specific suggestions for consideration by the Council.

First, there must be greater policy synergy between the two organizations.

“Regular and frequent consultations with the League of Arab States and its members on peace initiatives in the region would contribute towards achieving common solutions and meaningful outcomes,” Shringla observed.

“Second, efforts must be made to achieve comprehensive coordination at the field level, especially through regular coordination between the UN Special Envoys and Special Representatives and the League of Arab States,” he pointed out.

“Third, engagement with the League and its members in post-conflict peace building through reconstruction and economic development is equally important,” FS Shringla said.

“Fourth, ensuring the stability of the countries concerned and the region, and the welfare of the people, especially women and minorities, should be at the forefront of all such efforts,” he added.

Cooperation between the UN and the League of Arab States is of critical importance when it comes to the Middle East Peace Process, Shringla noted.

“Both organisations must take concerted efforts to support the reactivation of the Middle East Peace Process in line with the two-State solution, based on the internationally agreed framework and previous agreements between the parties,” he argued.

“India welcomes the agreements for normalisation of relations between countries in the region, which we believe will contribute to greater peace and stability in the region,” the Foreign Secretary said.