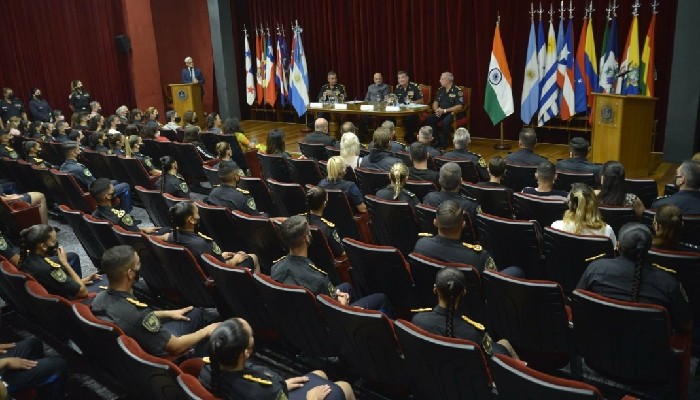 The Indian embassy launched the 'Yoga Capacitation Project' on Thursday.

The Indian embassy on Thursday ushered in a collaborative project, the 'Yoga Capacitation Project', with the Argentine Federal Police to promote Yoga for the physical, mental, and emotional well-being of the security personnel and prison officers.

The Indian Embassy in Argentina took to Twitter to share pictures of the inauguration of the project, and wrote, "Amb @dineshbhatia jointly with Juan C Hernandez, Chief of @PFAOficial & Dean of @iupfanoticias inaugurated Yoga Capacitation Project for physical & mental well-being of officials of Argentine Federal Police."

On March17, Indian Ambassador Bhatia held a meeting with Minister of Justice and Human Rights of Argentina Martin Soria. During the meeting, the two had a discussion on introducing Yoga for the physical & mental well-being of security forces, prison authorities and inmates of jail in Argentina.

During his meeting with the minister, Bhatia highlighted the benefits of Yoga in reducing or even removing stress, achieving well-being philosophy. The Argentine Minister thanked the Indian Ambassador for his efforts in strengthening the relations between the two countries.

It may be noted that the Indian government has been popularizing Yoga at a number of international forums highlighting the related health benefits of this ancient science.

On Tuesday, the second inter-ministerial meeting to discuss the celebration of International Yoga Day (IDY)-2022 was held in New Delhi.

International Yoga Day is widely celebrated on 21 June annually since 2015, following the adoption of a United Nations (UN) resolution on the subject.